First of all, a big apology to everybody who is waiting for me to write something about Descent or Arkham Horror, as originaly promised. I had very little time to spare recently and many things that kept my mind occupied. So today I will give you another review of a rather light filler type of game: Roll Through the Ages – The Bronze Age by Matt Leacock of Pandemic-fame. But don’t worry, that Descent-review is coming. Promised!

Roll Through the Ages (RTtA for short) is a simple dice game for up to four players. Actualy it is very similiar to that extremely uncool and ungeeky game calle Yahtzee – you roll dice and try to get certain results to cross of your scoresheet. Sounds unsuitable for roleplayers and serious geeks in any field? Ahhh…wait a moment: Have I told you about the theme? It’s a civilization-building dice game and the dice are custom, showing results such as workers, food and trade goods. Does that sound better? Yeah? Thought so. 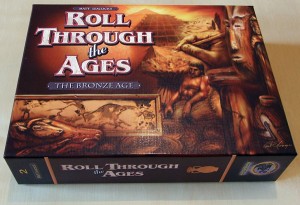 Roll Through the Ages – The Box

At the start of the game, each player get’s a score sheet and a peg board (see picture below). The score sheet allows you to keep track of where you spend your resources and a few other things: How many cities and monuments you have build, which developments your civilization has bought, how bad you people have been hit by disasters. During the game you just tick off the appropriate boxes with a pencil. The peg board allows you to track your resources: Food and the five different kinds of trade goods. You just move the peg in the appropriate rows up and down – much more convenient than writing stuff down. 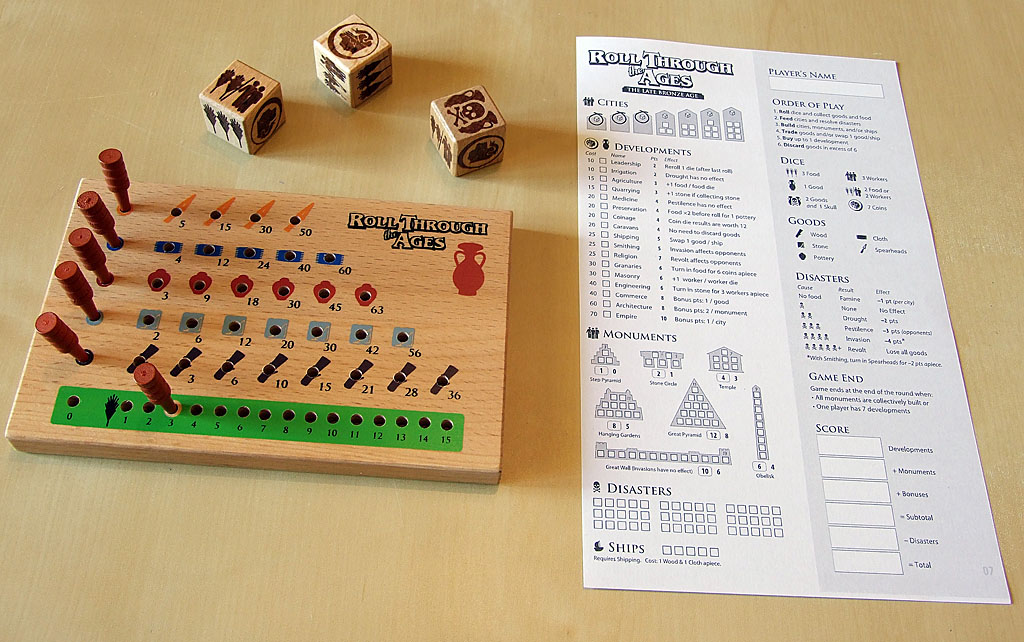 Roll Through the Ages – Set-Up

The heart of the game – as you propably already guessed – are the dice. They are six-sided, wooden dice with various symbols.  Basicaly you can get the following results: Workers, Food, Coin, Trade Goods and Trade Goods and Disaster.
Each turn you get to roll one dice per city you have (you start with three) and have the chance to re-roll any or all dice twice. The only result that always must be set aside and may not be re-rolled are disasters. After you have used up your re-rolls or are satisfied with your result, you start by recording the food and goods you have rolled.
Food is important of course – how are you supposed to build a glorious civilization, if you don’t feed your people? You need one food for each city you control and any shortages are famines, that count as disasters (more on that later). Trade Goods are the basic “currency” in the game, that allowes you to buy developments. Much like in the original Civilization boardgame, Trade Goods become exponentialy more valuable, if you have more pieces of a single good.

After that you have to feed your cities (as explained above) and resolve the rolled disasters. Generally speaking, the more disasters you have rolled, the worse  the disaster will be (i.e., the more points you are going to lose). So while all these mishaps have fancy names like Drought, Pestilence or Invasion they result just in making you lose points.

Finally you get to spend your other resouces: Workers allow you to build cities and monuments. As you roll one dice for each city, it obviously is a good thing to  have more cities as quickly as possible. Monuments are important, because they give you points at the end of the game. But you have to be quick – only the first player to complete one specific monuments gets full points for it. The second gets half, everybody else gets nothing.
You can also spend coins and trade-goods to buy developments, which give you various advantages and also give you points at the end of the game.

Basically, that’s your turn. The game continues in this fashion, until either all monuments haven been built at least once by any player or a certain ammount of developments has been purchased.  Then the game ends and all players calculate their final score.

Truth be told: This game is really just Yahtzee. But it has enough “chrome” to make it appealing to gamers. The whole civ-building aspect gives the game a very nice feel and it’s a lot of fun to give other players a pestilence instead of just saying “Everybody loses 3 points”.
It’s another game, that suffers a bit from lack of player interaction. Where the original Civilization was defined by the interaction through trading goods, in RttA everybody just rolls his dice and the possibilites to do anything with or to the other players are severely limited.
But on the plus side the game is extremely simple and takes about 30 minutes. So you really can not expect the depth of play, that a 6 hour sessions of Civilization would give you.

All in all, Roll Through the Ages is a game I can heartily recommend. It’s relatively cheap, easily transportable, quickly explained  and played. Obviously it has a high luck factor but you still get a chance to make meaningful decisions and the luck will also allows new players to have a chance against veterans.
It’s one of my favorite filler games as it can be easily pulled out and played in half an hour. So it’s a nice game to have around, if you are waiting for that last player to show up to your roleplaying session.

Jim Ward in need of help