Gary Gygax, was a writer and game designer. In the 1960s Gygax founded Gen Con. In 1971 he help develop the war game Chainmail. He co-founded the company Tactical Studies Rules (TSR), and in 1974 Gary Gygax along with Dave Arneson created the legendary Role Playing Game, Dungeons & Dragons.As players of the role playing games we all owe a great debt to Gary Gygax. Because of him we get together with great friends to play great games and act out great adventures. We use our imagination to create wondrous wolds and grand encounters that the most advanced computer game can’t even come close to emulating.

All of us would like to take a moment and share how Role playing and Gary Gygax has affected our lives.

ROBERTO: I was star struck by Gary Gygax!

When I first started putting together my contribution to this post in my head I had a longer post in mind. My “relationship” with him (Well isn’t he pretentious! But you know what he means…) is a long one and has gone through various stages, but I’ll just tell you what happened when I saw him.

Yes in 2007 when I went to Gen Con Gary Gygax was there, at some booth, I really can’t remember which one, there was a line to get his autograph. Since I had no book by him with me (What was he thinking?) I passed on the line and figured I’d get to see him sometime later in the convention. 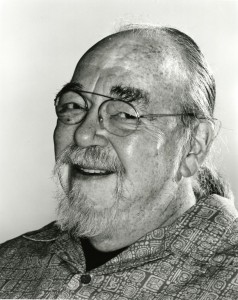 Later that same day I was walking down a convention center corridor and saw him coming in the opposite direction, he looked frail on his wheelchair and my mind was filled with things to say to him. “Hello, I’m a big fan!” or, “Hello Mr. Gygax, I came all the way from Puerto Rico because I discovered the magic of role-playing games through a company you helped found,” or even better, “Thank you for helping create something that has given me so much enjoyment, so many great memories, so many wonderful friends and has been such an important part of my life.”

Before I go on let me tell you something about myself. I have NO fear of speaking in public, let alone to important people. I’ve spoken to governors, first ladies; important local figures of politics and industry, and I’m not saying this in any way to be pretentious (He’s not, really!) and while I do get nervous I shake off those nerves pretty easily and go on. I only get dumbfounded when confronted by someone I truly admire, and artist who I feel has really contributed to the human experience. I’ve had that feeling on few occasions in my life, but that day, in that corridor in Gen Con I felt just like that.

So I was star struck, unable to compose a single sentence, Gary went by, mere feet away, and I was unable to say anything. All I could do was smile…

So I’ll say it here and (sadly) posthumously, Gary Gygax, thank you for changing my life!

MICHAEL: As a German roleplayer and someone who began his gaming career with Warhammer Fantasy Roleplay 1st Edition instead of D&D, I have been oblivious of Gary Gygax’ existence for a long time. I might have heard or read the name but I didn’t actually know who he was or what he has done. It was much, much later, when I finally found interest in D&D 3rd Edition, when I started reading his column in Dragon Magazine. “Up on a soapbox” was always an entertaining read and this column finally lead me to do some more research into the early days of D&D. Today, veterans of our hobby like Gary Gygax, Dave Arneson, Ken St. Andre and a lot of other are a great source of inspiration to me. It makes me proud to step in the footsteps of these giants and it gives me hope that roleplaying will be a hobby I can engage in for whole my life. And for that I thank you, Mr. Gygax!

YOUSEPH: I remember reading about Gary Gygax’s (“Long may he role 20′s!”) passing on the internet. I was still recovering from a recent Presidents Of The United States Of  America concert when I heard about it. Sadly at this point in my life I had not really gotten into Dungeons & Dragons, or any role playing games for that matter. But the ideas was there to get started. Living in Juneau Alaska, with our dark months I was wanting to get into a hobby that would entertain me over the winter. It was not till February of the following year that I really sunk my teeth in to Dungeons & Dragons.

When I started to really explore and write about D&Ds on my blog you can see it really took hold. With all the information and youtube videos I was finding it’s hard to not get swept up in it. The game took hold of me so well that most of my blog post for that whole year where in some way related to Dungeons & Dragons. As I started to play the game with friends and understand more about how everything worked I eventually started writing for Stargazers World. I have since poured my role playing energy into Stargazers world and left my own personal blog for more personal writing.

Gary Gygax and Dave Arneson created something truly wonderful with Dungeons & Dragons. Five of my closest friends and I net get together once a week to Role Play our weekly adventure through a home brew campaign. We laugh, talk, visit, and make some good food in the process. It gets us Alaska people out and about during the dark months and keeps everyone in touch with what is going on in each others lives. 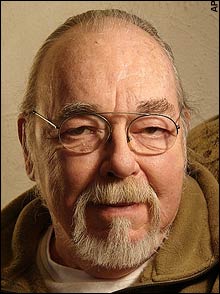 WORLDSMITH: Gary in some ways is an inspiration for me. Through my gaming life D&D has been the preferred gaming system for myself and my friends, it’s simple and adaptive style allowed us to concentrate more on the  story that was being told and the actions of our characters through these adventures and campaigns while providing us with some great settings.

Yet he has done more than simply provide an avenue of amusement to fill my late nights and early mornings he has brought to life a portion of myself that has helped to define, unashamedly, who I am and for that I do say thank you.

Finally D&D has brought a huge amount of enjoyment and entertainment for myself and my friends and that in part is what I would like to pass on to others of the gaming community through my own work. So let’s hear a HUZAR to the man who has given us all so much.

Gary Gygax and Dungeons & Dragons have had such a positive impact on people and on the role playing games as a hobby. A great debt is owed to this man and his creation. He has taught us all to use our imagination and acting skills to their fullest. May he rest in peace. 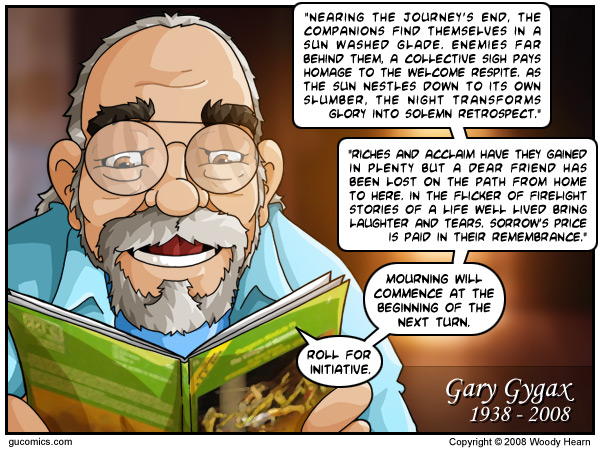 Why are some games so hard to understand?