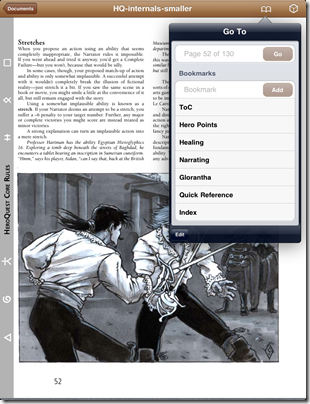 In March I posted about Apple’s iPad and what it could mean for us gamers. Even back then there were several apps that make a gamer’s life easier. But recently I learned about Dicebook. Dicebook is not just another PDF viewer but allows you to roll the dice while viewing PDFs. Since the iPad’s multitasking abilities are pretty limited, this could be quite handy.

Alas I don’t have an iPad yet, but Dicebook’s developer, David Dunham, was nice enough to provide me with a coupon code for a free copy.

So, if you own an iPad and an US account for the iTunes store, there’s one easy way to get your hands on this app:

Tell us in the comments below, how you use your iPad while running, preparing or playing pen & paper roleplaying games.

I will pick the winner tomorrow at noon (German time, which is currently GMT+2). Good luck!