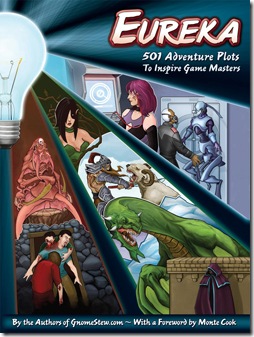 Some time ago, Martin Ralya of GnomeStew.com and Engine Publishing asked me if I was interested in reviewing Eureka. I’ve read about Eureka before and since I am chronically under-prepared for my games, it looked like the perfect book for me. So he send me a copy and I was immediately blown away!

So what’s Eureka about? Eureka is a 314-paged book containing 501 unique adventure plots that are meant to inspire game masters and help them preparing their own games. And I can assure you, that the authors of Eureka didn’t promise too much! After a foreword written by industry veteran Monte Cook and a chapter on how to use this book in your game, you get almost 300 pages of adventure plots for Fantasy, Horror and SF roleplaying games. Of course every plot not only lists other genres it’s easily adapted to, but also is tagged to help GMs to fit the plots into their own campaigns. That are much more potential adventures than anyone can run in a  lifetime, considering you can probably use a plot several times.

Eureka has been inspired by Georges Polti’s 1921 book “The thirty-six dramatic situations”. He theorized that all books, plays, movies etc. are based on just 36 basic plots. The authors of Eureka didn’t slavishly follow that theory, but used it as an inspiration to come up with a list of standard situations of their own. And then they wrote a couple of adventure plots for each of those standard situations.

Each Adventure Plot is not just a simple plot hook but a fully-fledged out plot that can be easily turned into  a proper adventure by any GM with only a few minutes to an hour of preparation. I have to admit I haven’t read all of the adventure plots yet, but from what I’ve read so far, they are pretty unique and very creative. I would love to give some examples, but that would probably spoil too much, but you can trust me, that I was blown away by the sheer creativity in that book.

Another noteable feature of Eureka are the four indices. There you can find plots by genre, tag, title and author. The PDF version’s table of content is also fully linked, so getting to a certain section in the book is just a click away. Perhaps I should also mention the artwork of the book. The full-color cover by Andrew McIntosh gives you a good hint of what to expect from the book and is beautifully done. The interior artwork was done by various artists in various styles but is always of pretty high quality. But in my opinion the book would have been as good even without any interior art. But that’s just me.

So why should any GM get Eureka? In my humble opinion it’s the most useful tool a gamemaster could probably have. We all know that sometimes coming up with a unique adventure can be very hard. Especially when you get older and you don’t have that much time to prepare your games, you’re happy for any help you can get. I am pretty sure I could open Eureka at any page, read the adventure plot I find there and run an adventure after only 15 minutes of prep, probably less. That’s the power of this book, and that’s why I wholeheartedly recommend it.

Alas I forgot to pick up the print version of the book when I was at Gen Con, but I will definitely order a copy in the next few days!

Please note that this review is based on a read-through of the PDF copy of the book I got provided by the publisher. I haven’t playtested all the 501 adventures nor have any animals been harmed during the course of that review. 😉

The print+PDF bundle available at the Engine Publishing online store sets you back $34.95 and you can get the PDF version for mere $16.95, which is a great price for this book. The PDF version is also available at DriveThruRPG for the same price.