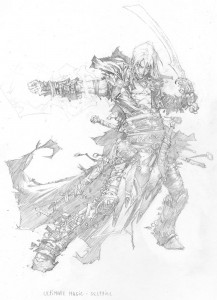 I don’t know how I missed this… As the resident Pathfinder guy I should have been all over this, work be dammed! How did I miss the new Pathfinder RPG playtest? Well let me correct this oversight.

In a post at the Paizo blog Jason Bulmahn announced their latest playtest, a gish (I hate the term, but it is useful shorthand) that tries to carve a space for a mixed martial caster. It’s just a seven page playtest class, I downloaded it last night and gave it a once over today and it seems promising. I think it could benefit from some rule clarifications and, mind you with no playtesting this is just an opinion from a brief read through, it seems a little underpowered when compared to other Pathfinder classes.

I have to applaud Paizo’s commitment to their fanbase. This continues a tradition begun with their year long playtest of the rpg, then followed by the playtest of the Advanced Player’s Guide classes. I really think it’s brave of them to recruit their fans to try out classes, provide feedback and integrate the ideas in the final product. In the day of the interwebz harnessing the power of the fans is a gamble because for every happy fan, there is someone who will never be happy with the final product and will moan and complain if their one little idea is not taken into consideration. All I can say is bravo guys, keep at it, I think it’s a better game because of it.

My current Pathfinder campaign began while the rules were still being beta tested. During the playtest for the Advanced Player’s Guide classes I had one player use on of them. I must admit that despite trying out the rules I DID NOT participate actively in the discussion. Shame on me! I’ll try to correct this on this latest opportunity.

This is the link to the page where you can download the Magus class. You do need a Paizo account to do it. And here is the area of the message boards where fans are already discussing the class. If you like Pathfinder I encourage you, check it out, try it and participate in the discussion.

Have fun guys and gals!