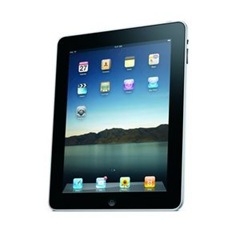 One of the reasons I was interested in getting an iPad was to be able to use it as a PDF viewer since I own a lot of RPG-related PDFs. Initially I thought about using an ebook reader like Kindle for that purpose, but alas these devices are currently not fast enough to display complex PDFs adequately. It usually takes to long to switch from one page to the next. And especially artwork-intensive full-color RPG PDFs don’t look that great on a black and white epaper display.

RPG PDFs on the iPad
When I first had the chance to try out a friends’ iPad I noticed that PDF viewing worked great. Flipping pages is pretty fast in most cases and the size of the iPad is big enough to be able to read the books comfortably. I have to admit I still prefer a printed book over reading it on the iPad, but it’s definitely an improvement over viewing PDFs on a netbook or desktop PC. Why? The tablet format of the iPad and the multitouch screen makes navigating through any document feel very natural and intuitive. It’s very close to the real deal.

There are three apps I can wholeheartedly recommend for viewing RPG PDFs on the iPad:

RPG products in other formats
Aside from PDFs some fan-created documents are available in .RTF or .DOC formats on the web. Although both formats are not really optimized for being viewed on a tablet device, GoodReader handles these formats pretty well.

Recently RPG publishers have looked into other digital formats as well. While PDF has become the defacto standard for digital RPG books, some companies have been dabbling with special ebook formats like the ePub format supported by Apple’s iPad and other devices. PDFs have some major problems when it comes to mobile devices: a) it takes a lot of processing power to display them and b) PDFs have a fixed format and don’t scale too well. The ePub format solves both these problem but it’s hard if outright impossible to layout an ePub document like a regular RPG rule book. EPub is definitely a great choice for novels or text books but it doesn’t work as well when RPGs are considered. 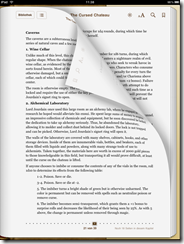 Richard Iorio from Rogue Games was kind enough to send me a couple of Rogue Games’ ePub books to allow me to check them out on my iPad. I have to admit they are looking pretty good, but they contain mostly text. As far as I’ve seen there are no tables or sidebars which are usually very common in RPG products. The format works good enough for most adventures or setting books which contain mostly fluff, but I have a hard time imagining what a RPG rule book in ePub format would look like.

What may the future hold?
Some magazine or newspaper apps show what the future of RPG books on the iPad and similar devices may look like. In case of RPG books it would be easy to include all kinds of cool features like a search function, dice rollers, initiative trackers, perhaps even a character generator. The question is if RPG publishers have the funds necessary to pull something off and if there are enough people interested in buying such an app for their device.  That’s something only time can tell.