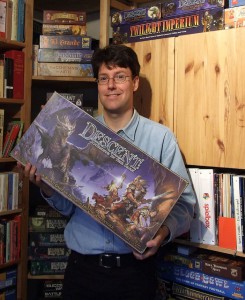 Descent is part of the FFG Big Box-Line of games.

Welcome back to another board game-review at Stargazer’s World. This time I am going to take a closer look at one mammoth of a game: Descent – Journeys in the Dark by Kevin Wilson and published by Fantasy Flight Games. I will try to give you a feel for this game and what I like about it. I won’t go into a detailed rules discussion – the game is just too complex for that and I fear this review would get rather boring that way. Do you want to know more? Download the rulebook at FFG.

Goggling at the bits

At first glance, this game is an obvious hit with role-players and fantasy geeks. Just looking at all the stuff in the coffin-sized box brings maniacal laughter to the discerning gamer. Or at least a deranged grin – see picture to the right.
There are 80 georgeous miniatures, depicting heroes and monsters. Heaps of cards with weapons, armour, treasures, skills and many other things. Beautifully illustrated map pieces, printed on sturdy cardboard, that can be connected to form ever changing dungeons. On top of that you get a mountain of tokens and LOTS of other stuff. The huge box is filled with high quality gaming goodness and just unboxing the game and punching out the counters and tokens is pure bliss – if you are, like me, such inclined. Just take my word for it (and take a look at the pictures): The components are beautiful and of high quality – we are used to nothing less from Fantasy Flight Games.

Not necessarily what you think it is 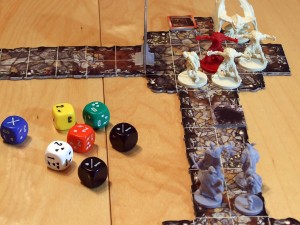 What most gamers hope for, when they see this game for the first time, is this: That it is the be all and end all RPG-style Boardgame. That this game will allow them to recreate the fun and depth of a dungeon-delving D&D-Campaign. That they can take a character from humble beginnings to epic hights of heroic might in an ongoing campaign. And that it does all these things within a more manageable timeframe than a “real” RPG. Many old-school gamers might also hope for an updated kind of Warhammer Quest, a game which allowed you to do those things to a  certain extent, but which feels rather dated by now, has quite a few problems of it’s own and, being out of print, is no longer easily obtainable.
Let me say this right now and without any sugar coating: Descent doesn’t live up to those expectations. It’s not THE RPG-Boardgame-Hybrid, not the Messiah that the children of D&D and Talisman have been waiting for. But Descent is a really great game in it’s own right – just not, what many people hope for.

Journeys in the Dark – How it all works 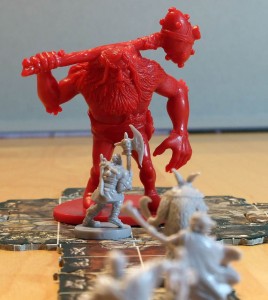 Um…guys? I could use some help here…

In Descent players take one of two roles: Hero or  Dungeonlord. There are up to four heroes in a game and these heroes try to defeat the Overlord, who controls the monster and traps in the Dungeon.
I have to get another misconception off the table at this point: The Overlord is not a Dungeonmaster/Gamemaster in the classical sense. The Dungeonlord is playing to win and he has to adhere strictly to the rules. Let me repeat this: The Dungeonlord plays to win. He is not just there to tell a story or pretend at putting up some token-opposition for the heroes but letting them win at the end, just to make a good story. This kind of stuff is for sissies – the Dungeonlord is in it for the sweet taste  of victory and for laughing maniacally at each mishap the heroes suffer. So if you feel, that heroes should always win in the end or at least 80% if the time – this game isn’t designed for that. And if you decide to play the Overlord as a plushy push-over, the game gets boring real fast.

Descent comes with a booklet full of quests, telling the Overlord-player, how to set up the map, where to place treasures and initial monsters. While he is doing this, the other players draw random Heroes, draw Skill-cards and buy their starting equipment. The Overlord shuffles his deck of cards and draws his starting hand. The game is ready to begin – and probably half an hour has already passed. 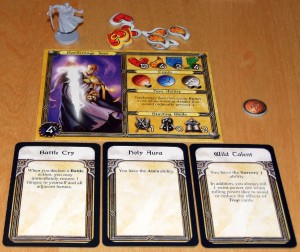 Each turn the heroes take their rounds in any order they agree to – but every hero has to finish his turn, before another hero can act. Heroes can move about,  attack monster, open chests, pick up treasures, drink potions and lots of other stuff.
The objective of the heroes is defined by the quest they are playing – most of the time it will be defeating some especially evil and mighty monster or something equally creative. But while the goal might be simplistic, it is not easy to achieve! The heroes have to be effective and well organised to be victorious: They have to move quickly and not let themselves get bogged down in pointless fights. They have to be clever in placing the party members, because any square that any hero can see, can not be used by the Overlord to spawn monsters. So a heroes life is quite hard: They have to think hard and coordinate their moves to get the best effect. That’s why Descent can feel a bit more like a squad-level tactical wargame set in a dungeon instead of a fantasy dungeon romp.
The sheer amount of options also carries a high risk of analysis paralysis: It is not rare for heroes to spend the better part of half an hour planning and discussing a single turn. During the course of the game, the Heroes will gain Gold and Treasures and can use these to buy new Skills and Equipment. When a Hero is “killed”, he loses some stuff and re-awakens in the city, from where he can return to the dungeon on his next turn. The really bad thing about dying in Descent is, that it makes the heroes lose Conquest Tokens. The heroes start out with a number of Conquest Tokens and have a chance to gain additional ones at certain points during the adventure. When the heroes ever run out of Conquest Tokens, they have lost the game. LOST!!! Mwahahahaha!
Errr…where was I? Oh, yes… 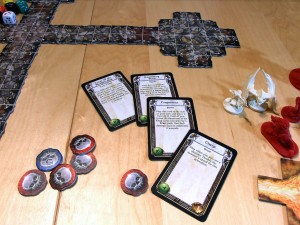 When the heroes finally finished their moves, it’s the Overlord’s turn. The Overlord can use his cards to spawn new monsters, set traps, buy permanent improvements (getting more monsters or drawing more cards each turn for example) etc. To play a card, he needs to spend Threat. The Overlord gains a fixed amount of threat every turn and can get more, by discarding cards from his hand. Moving and attacking with existing monsters on the board doesn’t cost any threat.
When the Overlord is done, a new turn begins, starting with the heroes. Repeat until one side has won – which means either the heroes achieving their goal or the Overlord making the heores run out of Conquest Tokens.

Is it any good? 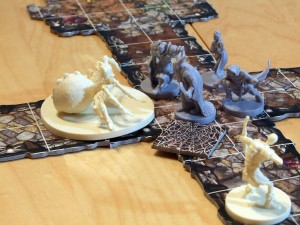 Arrrrgh! The spider got me!

I really can not tell you, whether this game is for you or not. It’s really not that easy to tell with Descent.
On the one hand it is a really cool dungeon-themed game with fantastic bits and pieces. But it can be pretty much a brain-burner – which might put you off, when you expected it to be light beer-and-pretzels fun. All the planning also means, that the game can take quite long: One dungeon can easily last three or four hours. But the game can also be over in an hour or less – which more often than not will indicate a sweeping victory for the overlord. (Dont’ forget that maniacal laughter when you  manage to do that as the Overlord!)
Descent also doesn’t really allow heroes to carry over their equipment and improvements from one dungeon to the other, as there isn’t a proper campaign system in Descent. There is the expansion “Road to Legend” which adds this – but it also adds a hell of a time commitment. A campaign can span months, even if you manage to play weekly!
So, to put it in a nutshell: If you would like to spend a few hours dungeon delving with your friends and don’t mind thinking about your move and don’t mind, that there is no real campaign-mode, this game is great. If “light fun” and “deep thinking and long playing time” aren’t mutually exclusive for you, then Descent could be for you.
If, on the other hand, you want a RPG-substitute, something, that feels like an old school RPG – forget Descent. In this respect Descent fails utterly. It is just a boardgame – nothing more and nothing less.
The game also won’t be for you, if you want something, that plays quickly. You should expect your games of Descent to last at least two hours, but the real problem is, that you don’t really know how long it will take. A single play might last one hour or four, so it is very hard to plan.

Ok, I hope, that I was able to give you a rough idea about Descent: Journeys in the Dark. Personally, I really love this game and the only thing I don’t like about it is that I get it to the table so rarely.