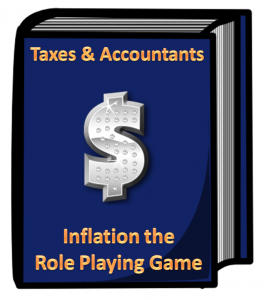 It’s always sad, often frustrating, to see the things we love increase in price. In the current economic environment increases in price seem inevitable, from foodstuffs and other necessities, to the leisure items we love like gaming books, DVDs and gaming magazines!

Yesterday I received a surprising e-mail from Kenzer & Company informing me they were increasing the price of Knights of the Dinner Table from $4.99 to $5.99…. I am a confessed fan of KotD; it’s the mainstay in my much reduced comic pull list. Kenzer sent the e-mail informing of the impending price increase after six years, no small feat in this day and age. There is an ongoing controversy about comic book prices and some companies are capitalizing on the fact they are keeping their price “low” (if $2.99 for a comic is low, I remember paying sixty five cents for comic books!), so  I can imagine this was not an easy decision.

But the good folk and Kenzer & Compay offer an option; they are honoring the old price on subscriptions and renewals before March 1st. I was a little baffled by the e-mail at first and then thought about it and I was really happy I got it. I’d much rather they tell me up front that they are increasing the price and why instead of finding out at the cash register at my FLGS. On this day and age where some companies treat their customers like faceless sources of income it is refreshing that some people treat their fan base with respect and honesty.

To me this has always been one of the strengths of Kenzer, undoubtedly they are a business, and continue to thrive in difficult times, so they are doing something right. But they are people who obviously love what they do and you can feel it. Knights of the Dinner table is more than a comic book, it’s a gaming magazine full of useful articles and fun columns, well worth the price at $4.99 and still great at 5.99.

I have been reading Knights since the days of Shadis and I’m never disappointed. At one time I used to buy two copies and mail one to a friend who could not get it where he lived. Getting the call from the comic store that my copy has arrived is one of the highlights of my month.  I invite you to try it out, I really wish more people purchased it at my FLGS; they only bring two copies, mine and one for a mysterious fellow fan I’m yet to meet. I will not be taking advantage of the subscription offer, I want to support my local FLGS and buying KotD there is one of the ways I do this.