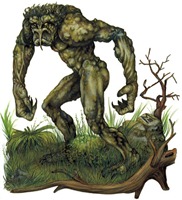 In light of recent events I thought it would be a good idea to come back to my RPG blogging advice series. Whenever you post something on the internet you risk that someone might disagree with your opinion or even be offended. If this person is a nice and reasonable member of the human race this might not that much of an issue.

But especially the anonymity of the internet seems to bring out the worst in people. Especially when it comes to controversial topics you might attract what we usually call “a troll”.

In Internet slang, a troll is someone who posts inflammatory[citation needed], extraneous, or off-topic messages in an online community, such as an online discussion forum, chat room, or blog, with the primary intent of provoking readers into an emotional response[2] or of otherwise disrupting normal on-topic discussion.[3] The noun troll may refer to the provocative message itself, as in: “That was an excellent troll you posted”. While the word troll and its associated verb trolling are associated with Internet discourse, media attention in recent years has made such labels subjective, with trolling describing intentionally provocative actions outside of an online context. For example, mass media uses troll to describe “a person who defaces Internet tribute sites with the aim of causing grief to families.”[4][5]

Even without actual trolling, people might have heated discussion on your blog, post nasty things about you or your articles on Twitter, Facebook, Google+ or any other social network. Especially if your blog is getting some popularity this is most likely bound to happen sooner or later. So what can you do to defend against these attacks?

Of course you can try to avoid controversial topics like the D&D Edition Wars for example. But even your totally harmless post about the use of the knitting skill might attract the haters. Sometimes people just thinks its fun to ridicule you. And more often than not these attacks might get personal.

The only thing you actually can do is to have a thick skin. Moderating the comments of your blog might help, but in some cases this might even encourage the trolls. When you start to blog publicly you always have to steel yourself against attacks. Be prepared that it will happen some day and don’t let the attacks get to you. There’s an old saying: “If you can’t stand the heat, stay out of the kitchen”.

This may sound harsh but alas that’s the best advice anyone can give you. As soon as you start blogging you make yourself a potential target. This is something you have to keep in the back of your head when you make the decision to start a RPG blog.

Luckily I haven’t had that many (if any) situations in my blogging career where I had to fend of the trolls. There were some heated discussions especially when D&D 4th Edition was concerned, but aside from that things have been pretty civil here at Stargazer’s World.

But I am sure some of my readers have a few stories to share. Aside from trying to grow a thick skin what would you advise? Are there any experiences you can share with us? Please post your comments below, every advice is highly appreciated.