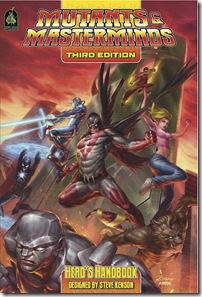 This is not going to be an official review of Mutants & Masterminds 3rd Edition/DC ADVENTURES (M&M/DCA). It’s not going to be a review because after recently gamemastering my first game of M&M/DCA I still don’t have a firm grasp of all the mechanics. Once I do I will come back and do a proper review for this game. Till then think of this as a non-review review, of my first attempt at  gamemastering M&M/DCA.

I will say this about M&M/DCA, my party has never laughed so much during a single gaming session and I think that says something about the game itself. From my first attempt at running this kind of game it is clear that it is not as rules heavy as Dungeons & Dragons 4th Edition is. My players where able to focus more on the story and worry far less about dice rolls. They all loved it.

As my gaming party showed up for our weekly game night know one knew which RPG we would be playing. No one had any prep and no one had any character sheets. I thought it might make for a better surprise if we just jumped in and I think that worked.

I was going to use official DC comic book characters that everyone would recognized for the very first game. I wanted to introduce people one-at-a-time and give them all a chance to shine. I felt the best way to do this was have them all fight a generic crime and partake in general acts of heroism that made superheros so popular in the first place. So many superhero movies now a days just show superheros fighting huge battles. What happened to their simple acts of heroism that made them popular int he first place? Like stopping a old lady from having her purse snatched or helping a little girl rescue a kitten from a tree. I wanted to bring back that feeling of awe and wonder that we all had as children towards superheros. 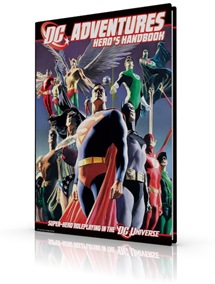 So, we all gathered around our gaming table when I looked over at one of our players. “Henrik”, I said “You find yourself in Berlin, sitting on a bench outside a monorail station just about to eat a croissant. Something zips past you so fast that the force pulls the croissant out of your hand and it lands on the ground several feet away. People on the platform are scratching their heads not sure what is going on, but you realize that the monorail train is speeding out of control. You are a superhero. What do you do next?”

My friend Henrik said that his character walks into the monorail station and into the men’s bathroom to change into his superhero costume. It was at that point I handed him his character sheet for The Flash! It did not take long for Henrik to get into the swing of things, he described his character racing after the train and jumping up onto the back of it. He ran across the top of the cars and to the front of the train where he bent down and looked inside to find the conductor of the train passed out on the controls. He leapt and kicked through the front windshield and remove the conductor from his seat and preceded to bring the speeding bullet train to a stop. The people in the cars behind the front of the train started to cheer. Just then The Flash’s JLA wrist watch started beeping. His presents was requested at JLA headquarters.

That is how much of the game went. After the Flash’s adventure I focused on another player, and than another until all had completed their acts of heroism and met up at JLA headquarters where The Martian Manhunter gave them an assignment to prevent Cheetah from robbing Gotham City Museum.

At the end of the game my party was given the homework assignment to build their own characters.

The thing that was clear right from the get-go with this game was that everyone was having a great time. Every single player was engaged. Everyone was cracking jokes and having a good time with it. It was effortless fun. I think that speaks volumes about a game. I just can’t wait to play it again.

I went to the effort of recording our first game. Please feel free to download it and give it a listen. Let me know in the comments section below if you would like to hear more podcasts like these. My group and I are more then happy to record them.