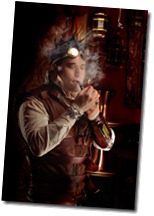 A while ago I already posted about Cubicle 7 and Abney Park’s upcoming post-apocalyptic steampunk pirate game. I have to admit I am easily excitable when it comes to roleplaying games, but c’mon, this is a post-apocalyptic game with a healthy dose of steampunk and it got pirates! And we all know that everything is better with pirates!

And it’s funny how the excitement about an upcoming game can also change your attitude towards certain styles of music. Because I wanted to learn more about the band Abney Park, I watched a couple of music videos on YouTube and was not really impressed at first. But in time their songs finally grew on me and I ended up buying their three most recent albums. 🙂

The music and lyrics really make you want to play or run a steampunk game. I wouldn’t recommend playing Abney Park’s music during a game session, because I think that players get to easily distracted because of the lyrics but it’s great to get in the mood.

As far as I know Cubicle 7 already sold a few copies at Gen Con, so the release should not be that far away. You can already preorder the game at the Cubicle 7 store or from the Abney Park market.

By the way, if you were at Gen Con at had the chance to check Airship Pirates out, please share your impressions in the comments below!