We actually planned to bring you some belated GenCon coverage this week, but as it seems Sunglar has some serious computer problems right now. So I had to look for something cool and interesting to share with you instead. Totally unprepared I checked the feeds I subscribed in Google Reader and stumbled upon a post by John Harper on his blog “The Mighty Atom”. Yes, he’s the same guy who has written Lady Blackbird and a few other cool indie games.

Recently he has discovered Stars Without Number, and since he planned to run a game with it, he just had to create his own custom sheets. 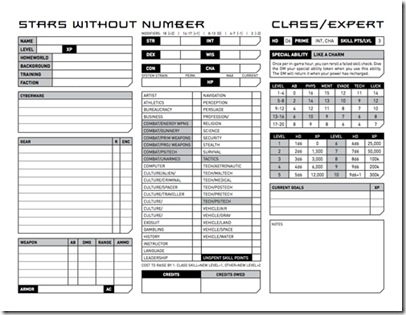 The PDF he created contains not only class sheets for the Expert, Warrior and Psychic, a starship record sheet, planet sheet and faction files. If you’re interested in running that game, you should definitely check out John’s sheets. And while you’re at it, let him know if you like them!