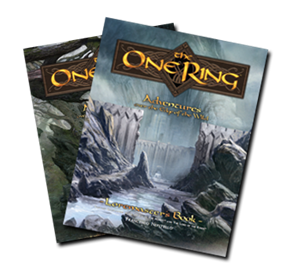 “The One Ring – Adventures over the Edge of the Wild” is the latest roleplaying game based on the works of J.R.R. Tolkien and I dare to say it’s the best so far. For me at least both MERP by Iron Crown Enterprises and the Lord of the Rings RPG by Decipher didn’t have the right feel to it.

When TOR was first announced, I was highly skeptical at first. I thought focusing on the Wilderlands only was a mistake and would only limit the possible customer base. But after reading the majority of the Adventurer’s Book, I am sure they did the right thing. The game is set a few years after the Battle of the Five Armies and is in my opinion a perfect introduction to Middle Earth.

I am currently reading the PDF version of the books that make up this game. I am waiting for the printed copy to arrive before I sit down and write a proper review, but let me assure you that even the PDF looks absolutely gorgeous. I applaud the creators for their decision not to use the movie license. Movie license games usually rely on set photos and movie stills too much. TOR on the other hand contains great original artwork that really fits my vision of Middle Earth.

The rules are pretty light and newbie-friendly. That’s another great plus. There are a lot of people who have read Tolkien’s books or enjoyed the Lord of the Rings movie trilogy but never played a roleplaying game. Making it easy for them to grasp the game’s concepts is very important if you want to attract non-gamers as well.

The best part of TOR is probably “NO SPELLCASTERS”! There’s a lot of magic in Middle Earth, but just not the flashy kind you see in most other fantasy settings. Magic in Middle Earth is more subtle and usually ties to objects, like magic swords or rings. In my opinion TOR gets it right by not including a spell casting career. There is some magic in form of Cultural Virtues, like the Dwarves rune cutting skills or the magic of the Elves, but it’s not even close to throwing fireballs around.

If you are a fan of Tolkien’s work you really should give “The One Ring” a closer look. I doubt you’ll be disappointed.

Some thoughts on the ENnies nominations