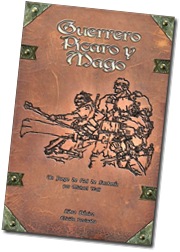 The deed is done!

Warrior, Rogue & Mage has been translated into Spanish! You can check out the game’s announcement on the Arcano XIII blog and download the complete game here.

As I said before, the guys behind the translation project have done a great job and the final product is just looking great.

The team around José Muñoz is currently thinking about translating all the existing supplements and some of the Arcano XIII members are developing their own material for the game.

If you are a Spanish-speaking roleplayer, please check Guerrero, Pícaro y Mago out. I hope you enjoy it!