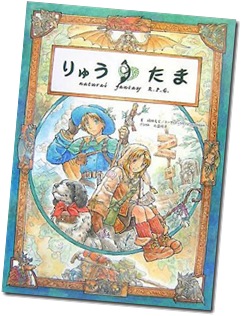 I suppose I can’t take full credit for Michael’s post on German RPGs, but I may have been the match to the powder keg!

I’m American, and a native English speaker. For many years now I’ve been learning German and Japanese. I did not grow up in a multilingual environment, nor did I have much of an interest in foreign languages until the final years of high school, so everything I’ve learned has essentially been as an adult. If you’ve ever tried to study a foreign language, you’ll understand that this entails a lot of work.

It’s important to keep things interesting. Naturally I’m a huge RPG fan, so games in other languages have a certain allure for me. Over on The Gnoll’s Den, my personal blog, I am working on a translation of the freely available Player Summary for the Japanese RPG Ryuutama.

There are a lot more English speakers in Europe, however. I’ve had the pleasure of meeting several German roleplayers and I tend to take the opportunity to ask them what they play. Although I’ve heard of Das Schwarze Auge and Kult from them, by and large I get the same response: Dungeons & Dragons. (To Michael’s credit, he is the most widely experienced German gamer I’ve met, and has quite a few more games under his belt.)

I once asked a friend of mine how to say "saving throw" in German and he admitted he didn’t know. "We’d normally say, ‘Mach ein Reflex Saving Throw‘ or something like this," he confided to me. (It’s Rettungswurf if you’re curious.)

All the cool kids, it seems, are learning English. It makes perfect sense. Thanks to the Internet, there is a huge amount of information out there on roleplaying games (and stuff in general, really) and knowing English gets you access to a significant chunk of that. DSA might have a big German fanbase, but D&D is international. It’s easy for native English speakers like myself to take that for granted.

Does this mean it’s futile to try to learn a foreign language in this day and age if you’re an English speaker? Of course not. You don’t always have access to the Internet. There is some great stuff out there that doesn’t get translated for an international audience. Making an effort to reach out and communicate is always worthwhile, and it gives us anderen Perspektiven.

In the meantime, go get yourself a copy of Dungeonslayers: Ein altmodisches Rollenspiel (auf Englisch, natürlich).