If you are interested in Triple Ace Games’ League of Adventures game, you should head to their online store right now. because the preorder deals will be taken down on Tuesday 19th June. So what is League of Adventure about? Let me quote the TAG website: 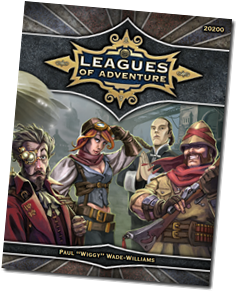 Welcome to Leagues of Adventure a rip-roaring setting of exploration and derring-do in the late Victorian Age!

Leagues of Adventure is a roleplaying game set in the late Victorian Age, a gritty steampunk game where the hostile natives are a serious threat, a pulp action game where the characters eat savage warriors for breakfast, a highly cinematic one which allows the characters to swing single-handedly from the underside of an early airship while bare-knuckle boxing pterodactyls over a lost plateau. Truth be told, it’s whatever you want it to be!

Whatever drives your character, there’s a world packed with danger, excitement, and mystery out there waiting to be explored!

So take an action packed trip into the world of Leagues of Adventure!

If you preorder, your books should be shipped in the next few days and you get the PDFs immediately. Shipping costs to Europe are reasonable and the quality of the books is very high, according to my good friend Vince, who got his copy today.

If you are a fan of Steampunk RPGs and the Ubiquity system, you should definitely check this game out. And these deals are just too good to pass up!