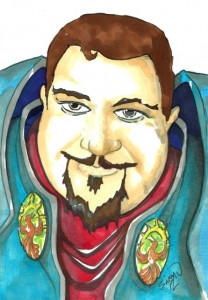 We interrupt you regular blog reading with this important message. I just got a new avatar for the blog! Michael got one a few months ago and I was just so envious I had to get one for myself. Well that’s not quite true. When I saw the dapper steam-punk Stargazer I asked him who had done his avatar for him and he pointed me to Symatt, a wonderful and talented guy who was kind enough to take my picture (a dangerous endeavor right there) and my desire to look like a paladin on my avatar, like the character from which I take my nickname, and came up with the image you see in this post.

I want to publicly thank him for the avatar. I am thrilled and uploaded it to Gravatar so you may see his creation in other services. Hope you like it as much as I do. It certainly easier on the eye than my picture!