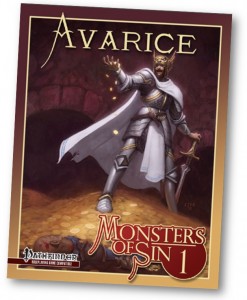 The Seven Deadly Sins have a strange allure in modern society.  They figure prominently not just in the religious tradition from whence they came but in popular culture. From comics, where they are enemies of Captain Marvel (the DC Comics version, currently called Shazam, not the Marvel Comics character) known as the Seven Deadly Enemies of Man; to movies, one of my favorite films, Seven, dealing with a madman’s killing spree inspired by the seven deadly sins. Role Playing Games are no immune to this allure, and Open Design has come out with a series to quench our hunger for sin related gaming supplements, the Monsters of Sin Series.

What are they about? Read on and find out…

So far they have released three of seven sins, Avarice, Envy and Gluttony. Open Design provided the blog review copies of the three. Written by author Ryan Costello, Jr. (who I assume is the one of the contributors to this blog and hosts of this podcast, I am not completely sure, but it’s a logical assumption) they share a common design. They are 10 page Pathfinder RPG compatible PDFs, not counting the front cover, table of content, OGL license and back cover, that leave 6 pages of actual gaming content. 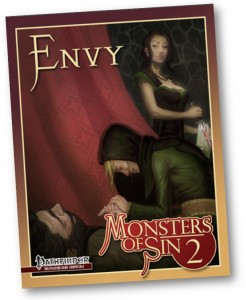 All three have beautifully evocative covers by Cory Trego-Erdner and interior art by Aaron J Riley. Since these are basically monster books the illustrations accompanying the stat blocks are (in my opinion) very important. They set the tone and create an expectation when you first flip through the book. Both artists are exceptionally talented and the art in all three books are top notch. In fact the whole layout of the books is very good. Clean, elegant, effective, and despite the use of color through most of the book, except the monster images, they are in black and white, printing this book out will not kill your printer.

What about actual content? The books follow what seems like a very effective formula. They begin with a discussion of the specific sin the book focuses on and a template corresponding to the sin, Avarice being CR +0, Envy CR +2 and Gluttony CR +3. Gluttony has both quick and rebuild rules, the other two just rebuild rules, but all are easy to add on a creature or NPC. Then there are three monsters thematically tied to the sin, one low, mid and high Challenge Rating monster and a high CR (18 to 20 so far) embodiment of the sin itself. All three end with a discussion of the sin in the Midgard setting. 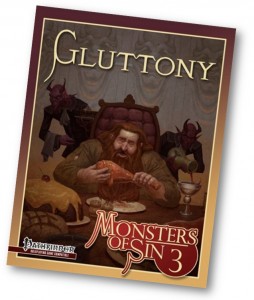 The books are short, concise and just brimming with ideas. Off all the monsters in the three books my favorites are the Hoard Golems from the Monsters of Envy (dragon hoards turned into golems. Imagine, kill the dragon, fight the treasure, I like that!), the Re-Echo Doppelganger (CR 14 doppelganger, what’s not to like) and the Embodiment of Gluttony, a horrific ooze with Lovecraftian overtones. I fact the three books out right now lend themselves to a nice sin themed mini-campaign. I can see it now, the dark cults of sin worshiping degenerates trying to foment these sins in the populations of different settlements, trying to bring about the manifestations of the embodiments. Will there be champions corresponding to the seven heavenly virtues? That’s a whole other series right there! When all seven Monsters of Sin are out and they get (not if, I really want all these monsters collected into a single, volume) collected into a single book such a mini campaign would be awesome! Looking forward to this…

All three are available from the Kobold Quarterly Store and other fine digital retailers.  At $2.99 each they are very affordable and well worth the price. So go ahead, grab yourself some monsters and let loose sin on your campaign!

D&D before I even knew what role-playing was!

Which fantasy writer am I?