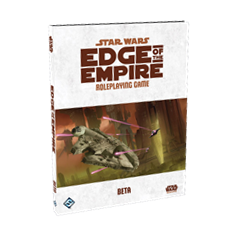 This morning I stumbled upon the news that FFG has started selling the beta version of their upcoming Star Wars roleplaying game at Gen Con. Selling the beta version? Yes, that’s right. You can also order it from the FFG games site for just $29.95 plus shipping. That game publishers sell beta versions of their games is not unheard of and usually it’s a PDF that you can download from an online store like RPGNow that gets updated to the final version at release or at least provides you with a discount towards the price of the final product. Not so in this case.

On the one hand I can see a lot of people who would love to pick up the beta softcover book as a collector’s item, but on the other hand isn’t that a waste of resources? And is it really necessary that FFG makes people pay for the opportunity to help them make their game better? In a way it seems it’s just a marketing stunt that should also help to flush some money into their coffers. For some reason that doesn’t feel quite right.

What adds insult to injury is that the book excludes art and certain “thematic materials”. In my opinion about $30 for a beta version of a game without any art feels pretty steep, especially since other publishers released playtest versions of their games for free. I am wondering if this “beta version” is actually meant to get some player feedback before the final release or if it’s just a way to make Star Wars fans pay twice.

The game itself might actually be quite nice. FFG has released a couple of awesome RPG products in the last years. So this new Star Wars game might be another winner. Alas Edge of the Empire will use custom dice much like Warhammer Fantasy Roleplay 3rd Edition did, and from what I’ve heard the first rulebook will not allow you to play Jedi. But since the game is obviously set into the Rebellion era, this might actually make sense.

While I am quite excited about a new Star Wars roleplaying game, the whole thing with the paid beta leaves a bad taste in my mouth. Don’t make me pay $30 for a 224-paged artwork-less beta product that is a collector’s item at best. If they release a cheaper PDF version or if you get the final game as a heavily discounted price if you bought the beta, I might be tempted, but currently I don’t see myself checking that game out anytime soon.

Getting Children into Gaming