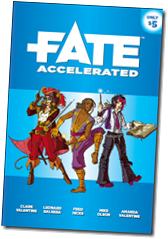 As one of the backers of Fate Core, I got the final electronic copy of both Fate Core and Fate Accelerated Edition a couple of days ago. Fate Core is a massive tome of 310 pages, so I decided to focus my attention of the much smaller FAE first. The 50-paged PDF contains a complete but heavily streamlined Fate game suited to run games in every genre. While most elements of Fate Core are still there, it feels much more lightweight.

Each character starts with three Aspects (a high concept, a trouble, and an additional one), the six approaches (Careful, Clever, Flashy, Forceful, Quick, and Sneaky) and one stunt. Most other Fate-based games have a lot more Aspects (up to ten) and use a long list of skills. Reducing the number of Aspects makes it much easier for new players to get into the game. I also guess that these two Aspects get much more use than the regular Aspect in a Fate Core game. Approaches are basically very broad skills. At first I was not too fond of the idea of replacing concrete skills with the more fuzzy approaches, I actually grow fond of them after a while. One of the goals of FAE obviously was to be more newbie-friendly. And it’s definitely easier to explain how to use the approaches instead of the regular Fate skills.

I haven’t run any FAE games yet, but I already have some ideas how it could be used by me in the future. Since it’s pretty rules-light and written in a way that even RPG newbies can understand its rules, FAE is perfect to introduce new players to the hobby. Characters can be created in mere minutes and have enough “meat on their bones” to be interesting. As soon as there’s a German translation, I will introduce the game to my RPG pub meeting crowd!

Fate has always a game that made me interested in tinkering with it. FAE makes this even easier. From what I’ve seen so far it should be easier and faster to add stuff to FAE instead of tinkering with the more massive Fate Core. BUT I haven’t delved too deep into Fate Core yet, so I might be mistaken.

FAE might also be perfectly suited for one-shots and con games. Without having to tweak the rules you should be able to run games in every setting imaginable. The approaches are genre-agnostic and stunts are player-defined, so they can easily made to fit the setting you have in mind. So you want to run a game set into the setting of your favorite TV show or computer game? No problem. Create the characters and you’re good to go. FAE might not be as easy as RISUS, but I am pretty sure it could be used in pretty much the same way.

I am definitely excited about what the community will do with the Fate Accelerated Edition rules in the future. Evil Hat will release a new edition of the Dresden Files RPG in the coming year, which could finally allow me to run games in this setting. The current Dresden Files game using the 3rd edition of the Fate rules always felt a too crunchy to me.

What are your thoughts of FAE? Are you looking forward to get it when it’s publically available? Or do you stick to regular Fate Core? Please share your thoughts below. Every comment is highly appreciated.