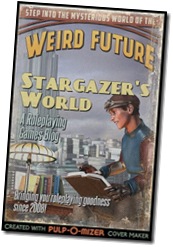 I am pretty sure some of you have already heard of Pulp-O-Mizer, the customizable pulp magazine cover generator. Up until now I haven’t played around with it that much, but for this post I gave it another look.

In a nutshell it’s a web application that allows you to create pulp magazine covers. So what could you use these for? I’ve noticed that several RPG-related blogs actually use these covers on their blogs.

If you are currently running a pulp RPG you could actually use it to create custom covers for your adventures. Imagine that you want to run a new adventure called “The Death Ray of the Magnificent Brain Thieves”(1). Wouldn’t it be cool if you could give your players the adventure’s title as a pulp magazine cover handout?

Regardless of how you intend to use the covers, it’s definitely fun to play around with the Pulp-O-Mizer. If you have a few minutes to spare, check it out! That’s an order! 😉

Notes:
1) This title has been created with the Pulp Sci-Fi Title-O-Tron, another great web app on the same site.