After being sick last week I finally feel fine enough to write another blog post. Today I want to write about what games I’m currently excited about. Yeah, I know, I am easily excitable, but trust me, these games are definitely something to be excited about.

The first game on my list is Monte Cook’s upcoming Numenéra. Numenéra is science fantasy roleplaying game set into the far future of Earth. Science is so advanced it basically looks and feels like magic. The setting also shares a few tropes with the post-apocalyptic genre. Several civilizations each spanning millions of years have fallen and the people living in the Ninth World search the ruins for artifacts from ages past. The system will be rules-light and promote gameplay that centers on characters and story – not rules. I didn’t back the Kickstarter back in the day, because a) I just hadn’t enough money to spare and b) I wasn’t really convinced that Numenéra was the right game for me. But the more I read about it the more excited I got, and so I decided to preorder the PDF and get the books when they are available in local stores.

I am a big fan of Joss Whedon’s Firefly, so it’s no surprise I am looking forward to the new Firefly RPG Margaret Weis Productions is working on. It will not be an update of their Serenity RPG but a totally new game built from the ground up using the Cortex+ System. I have to admit I had my issues with Cortex+ in the past. Don’t get me wrong, I think it’s probably a good system, but I have a hard time getting my head around it. Hopefully the new Firefly RPG will be written in a way that I can understand it. Nevertheless I am very excited. In my opinion the Verse is a great place to play in and it’s great that MWP has got the rights again to work on a new RPG set into this setting. Hopefully they can keep the license a bit longer than the Marvel one. 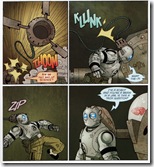 Last but not least I want to mention the Atomic Robo roleplaying game by Evil Hat. Atomic Robo is a comic book series about a nuclear powered robot built by Nikola Tesla who’s fighting Nazis and other evil doers with SCIENCE! I didn’t actually know about the comics before I read the game’s announcement but I totally fell in love with it as soon as I checked it out. The roleplaying game will use the Fate Core rules and should be out anytime soon now. The comics are funny, witty and very exciting. If the roleplaying game will even be half as fun, we will be in for a ride. Alas preorder hasn’t started yet, so I’ll have to wait a bit longer before I can throw more money at Evil Hat Productions. ^_^

What are the games you’re excited about right now? Please share your thoughts in the comments below!

From The Imperial Forges released @ DriveThruRPG