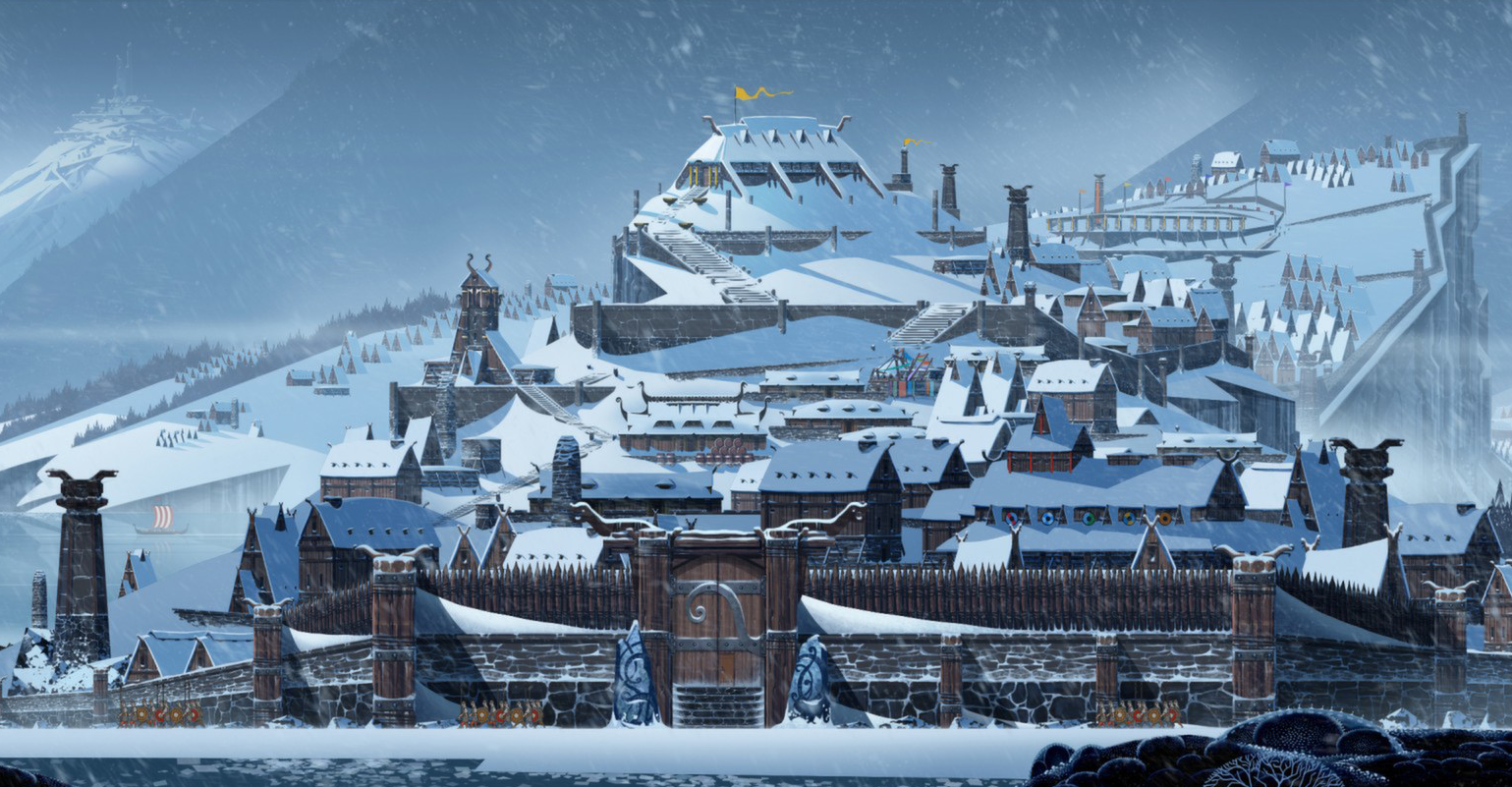 It doesn’t happen often that I cover computer games on this blog, but there are a few exceptions to the rule. Today I want to make such an exception for The Banner Saga, an epic roleplaying game inspired by Viking legends, which I picked up from Steam this weekend. Even if you are an avid tabletop gamer, there’s much to love in The Banner Saga.

The first thing you’ll notice is the beautiful, handpainted artwork that gives the game its distinctive style. Nowadays computer games often use 3D graphics but The Banner Saga’s presentation harkens back to the golden age of 2D adventure games. I’ve included a couple of screenshots below for your convenience.

In The Banner Saga you control the fate of two groups of people: an army of varl (huge  horned giants) accompanied by the son of the human king and his retinue and a group of human refugees fleeing from the dredge. The dredge are the main antagonists of the story, large golem-like creatures who are waging a terrible war against varl and humans alike. The game confronts the player with a lot of difficult situations and more often then not you have to make hard choices and every decision has dire consequences. Do you allow a group of fighters you meet on the road join your army or you let them fend for themselves? Do you charge into battle or do you pick a more defensive stance? Do you fight against your fellow men or do you avoid that? Do you buy more supplies for your army, or do you acquire items which will help you during battles? Every bad decision may lead to the loss of lives.

Aside from the dilemmas you are confronted with, the story is told during the numerous dialogs and turn-based battles. Especially the latter are more deep than you might think at a first glance. The combat system is pretty easy to learn but hard to master – and a lot of fun. The fights are quite dangerous. How you position your heroes is as important as whether you attack you enemies strength or their health. Make the wrong decision and your heroes are incapacitated with a couple of blows. But if you employ the right tactics,  combat can be extremely rewarding. Depending on the difficulty level your incapacitated heroes are injured and fight at

reduced strength. And again you’re posed with another dilemma: do you make camp and rest till your heroes are healed again or do you soldier on to reach the next destination of your trek earlier?

I have played The Banner Saga for a couple of hours now and I enjoy it very much. The setting is extremely interesting, the artwork and the soundtrack are just awesome, and especially the turn-based combat is very enjoyable. If you enjoy epic computer roleplaying games, you should give The Banner Saga a try. It’s available from GoG or Steam for about $25. Alternatively you can give The Banner Saga: Factions a look, which is a free-to-play spin-off which focuses on the turn-based battles. Even if you’re not into computer games, the artwork and the information on the official website can easily be used as inspiration for you Viking legend-inspired games.