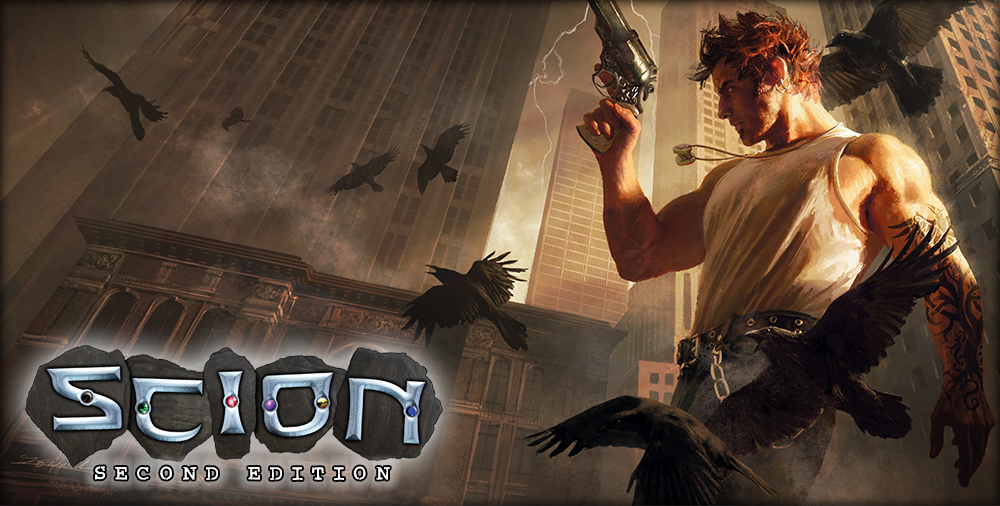 I don’t know if this is intentional but the more I read about Scion, and watch actual plays on Youtube the more I am seeing this as the Percy Jackson role playing game.

I absolutely loved the Percy Jackson books, even if they were written for teenagers. Reading those books is a lot like remembering your very first forays into D&D, in my case the basic set. The films on the  other hand appear to have been made by someone who hadn’t read the books. The first film was one of the few films I have gone to and I actually felt like I wanted my money back.

So Scion and Percy Jackson share the same basic idea. Your character is the offspring of a god but doesn’t know it. They have gone through their life quite happily, probably, until now and then weird stuff starts to happen all around them.

Scion 2nd edition comes as two books, conveniently called Book One and Book Two, to save confusion and the pair will set you back $35 or so ($29.99 if you buy the bundle of both books).

The biggest change between first and second edition seems to be the adoption of the newer Storypath system from the older Storyteller system. The intention being that storypath is better able to cope with the most powerful of entities better than the previous rules.

I never played Storyteller so I don’t know if this was much of a problem or not. It looks like all the new Onyx Path games will be converted from Storyteller to Storypath.

I am developing an liking for ‘dice pool and count the successes’ based systems so I was already onboard before I even started. I also had a soft spot for Percy Jackson so I knew the sort of thing I wanted to experience.

I have not played this game a lot, I have only had the rules for 10 days or so. This is not an authoritative review. The game is hugely fun to play but I found it demanded a lot when running the session. That could be down to me and my lack of experience of the game. Even the more experienced GM I got to play with started to jump back in time within the scene to clear up confusion or occasionally to change facts. I like rules light games and Scion while not really rules light it is certainly no more than rules medium, it that is a thing. With less rules it often puts more emphasis on the GM to paper over the cracks. That is accepted game play. In scion you are asking, or asked, what do you want to do and how are you going to do it. What skill and what attribute are you going to apply. At times I got the impression that the more experienced players were min/maxing on the fly. They has a kind of stock answer to how they could apply their strongest skill and strongest attribute to just about every situation. The players that could leverage their best abilities had bigger dice pools to play with and got more successes.

If everyone is doing this then it really doesn’t matter, if four successes is the norm then the GM can set the target number of successes accordingly. If only one or two are adept as min/maxing like this then it becomes harder as to challenge most of the group is to allow the others to simply walk all over the challenges.

Is this a Good Game?

I would say yes. I enjoyed it and it was quick to pick up and learn. The caveat is that you need good players who are driven by a desire to explore a great story. I suppose your typical power gamer is not likely to be drawn to the storypath system unless it is the only game in town.