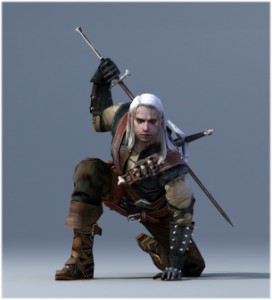 Recently CDProjekt has released the Enhanced Edition of its roleplaying game “The Witcher”. The game uses a heavily modified Neverwinter Nights engine and it’s based on the novels by Andzrej Sapkowski. One part of the games re-release was the soundtrack that you can now get for free!

The download consists of a ZIP file (approx. 191 MBytes in size) that contains the official score and “Music inspired by The Witcher”.

The official score was composed by Adam Skorupa and Paweł Błaszczak. Instead of some of the other soundtracks I recommended for roleplaying purposes the music from The Witcher is not atmospheric but more melodical, making heavy use of choirs (or samples sounding like choirs) and there are pieces that sound like medieval tavern music.

“Music inspired by The Witcher” is a compilation of songs that were inspired by the computer game. It contains songs from different genres and most of the tracks weren’t exactly my cup of tea. But your mileage may vary.

If you are interested to learn more about the Witcher check out the great Witcher Wiki. By the way, there’s also a Polish roleplaying game set into the world of the Witcher novels called Wiedźmin: Gra Wyobraźni. But as far as I know this game was never translated to English.