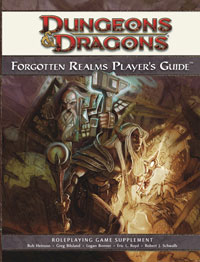 On Saturday I got my copy of one of WotC’s latest books, the Forgotten Realms Player’s Guide. Although the Player’s Guide is a bit thin in my opinion, it’s a very good looking and interesting book that brings a lot of new option to your D&D game even if you don’t want to run a Realms campaign.

Introduction
The “Forgotten Realms Player’s Guide” is a hardcover book with 160 pages. The overall look is great as with all the new D&D 4th Edition books. There are six chapters and aside from chapter 3 (“Backgrounds”) and 6 (“Almanac”) you can probably use the content of the other chapters in non-FR campaigns. So even people not interested in the Realms could find the new races and class options useful.

Races
The first chapter “Races” provides us with two new playable races: Drow and Genasi. I don’t think I need to introduce the drow here since almost everybody has a least some knowledge about that infamous race from the Forgotten Realms. In 4th Edition they are finally playable as 1st-level characters. As racial powers they get “Cloud of Darkness” and “Darkfire”. The first power allows to create a shroud of darkness as a Close burst 1 and the latter power is a Ranged 10 power that gives you combat advantage against one foe. Both powers are nothing spectacular, but fit the Drow well.

The Genasi are of roughly similar to humans but are “touched” by the elements. For example a Stormsoul genasi has purple skin, silvery energy lines covering the skin and glowing crystalline spikes instead of hair on the head. There are five variations of Genasi (Earthsoul, Windsoul, Watersoul, Firesoul and Stormsoul) each with its unique physical qualities and racial powers. For example Stormsoul genasi get the “Promise of Storm” racial power that allows them to deal 1d8 extra lightning damage until their next turn once per encounter. The genasi are also perfectly suited for the swordmage class detailed in the next chapter.

The rest of chapter 1 deals with the other core races and their place in the realms and gives some information on “supporting cast” like gnomes, goblins, goliaths and so on. So there are still no Gnomes for player characters. I am pretty sure they will return with the Eberron Player’s Guide since the members of House Sivis are Gnomes.

Character classes
Chapter 2 “Character Classes” brings us the new swordmage class, an arcane defender. From what I’ve seen so far the swordmage is my new favorite class. There are two variants, the assault and the shielding swordmage. The assault swordmage uses elemental attack powers and the shielding swordmage specializes on defense using energy shields. Both variants look very nice but I slightly prefer the assault variant. One cool class feature is “Swordbond” that allows you to call your bonded weapon to your hand from up to 10 square away. The new class somewhat reminds me of the psionic warrior of 3.5th edition D&D but since it uses magic and not psionics it probably fits into more campaigns.

The rest of the chapter deals with a new warlock pact, the “Dark Pact”, the Spellscarred and new Paragon paths and one new Epic destiny. The Dark Pact is a whole new option for the Warlock especially drow warlocks. Dark pact warlocks get their power from a pact with the “dark beings that lurk in the shadows of the drow civilization” and their spells focus on darkness, poison, madness and spite.

Spellscarred is not a complete class but an option for all classes. You take the “Student of the Plague” feat to multiclass into Spellscarred and get a number of traits and you can later choose powers from the Spellscarred list. You have to bear a spellscar in order to chose the feat. Usually the taint of the Spellplague that causes spellscars to manifest is an unique feature of the new FR setting, but a GM can probably introduce Spellscarred to any campaign.

There are 25 new paragon paths and a lot of them should be usable in other campaign as well. I haven’t checked them out fully, but there are quite some nice options for your players. The epic destiny featured in the FR player’s guide is the Chosen. When you choose this destiny you become your deities’ proxy in mortal affairs and you get some demigod-like powers. Each Chosen gets a specific level 26 utility power granted by his or her deity. There are only FR deities listed, but a crafty GM can either create his own powers or try to fit an existing power to a non-FR god.

Backgrounds
The third chapter “Backgrounds” focusses on character backgrounds in Faerûn. Each region is listed complete with regional benefits (the 4th edition equivalent of regional feats), common knowledge and people of the region. This section of the book is a great addition to the “Faerûn and Beyond” chapter in the Campaign Guide. Now the GM never needs to give the Campaign Guide to the players since all information relevant to them is in the Player’s Guide and they get a couple of interesting player motivations.

Feats and Rituals
The fourth chapter “Feats” adds some new racial, heroic, epic, swordmage, channel divinity and multiclass feats to the D&D game. Aside from the channel divinity feats you can probably use all the other feats in non-FR settings as well. The chapter “Rituals” provides us with a couple of new rituals like “Waterborn” that gives up to eight target creatures the ability to breathe underwater and resistance to cold and pressure of the deep oceans.

Almanac
The last chapter “Almanac” gives the players some information on the setting, its deities, calendar, lore and so on. The chapter is a bit short in my opinion, but the rest of the information can easily provided by the GM using the information available in the campaign guide.

My two cents
From what I’ve seen so far, the Forgotten Realms Player’s Guide is a must-have for all players and GMs interesting in running a FR campaign. But it also could come in handy if you want to play a drow or genasi and/or try out the swordmage class. The artwork is top notch and worth every penny. My next task is now to convince my GM that he allows me to play a genasi swordmage in his homebrew campaign…