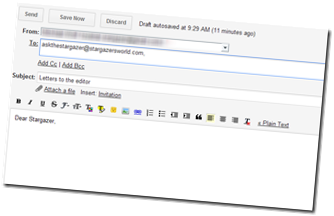 For a while now I have been thinking about starting a new hopefully regular feature on Stargazer’s World called “Ask The Stargazer!”.

So what’s the idea behind this new feature? You can send in your questions and the team of Stargazer’s World will try to answer them to the best of their abilities. You have a question about an existing or upcoming Stargazer Games product? Ask away! You want to know what we think about a recent development in the RPG industry? Send in your questions. You always wanted to know what we think about game X? Send us an email.

Of course this will only work with your help. So please think about what you want to know and send your questions to askthestargazer@stargazersworld.com! Please note that it may take a while until we publish our first “Ask The Stargazer!” post here. And if it’s possible try to keep questions short and to the point.

So what are you waiting for you? Send us your questions!