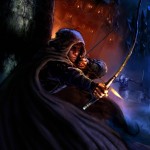 When “Thief – Deadly Shadows” (aka Thief III) was released, Ion Storm also made the games’ soundtrack available for download. The games’ score consist of 16 atmospheric tracks that were composed by Eric Brosius.
The soundtrack has some tracks that work good when you try to create an eerie mood, but it also works great when running a dungeon adventure.
The complete soundtrack can be downloaded here.

2
Ask The Readers / Other Systems / RPG

Skill Resolution or playing the hand you are dealt

(Almost) Back to the roots: Warhammer Fantasy Roleplay 2nd Edition