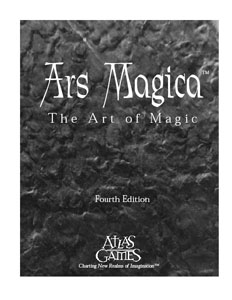 Long before White Wolf created their World of Darkness there was Ars Magica by Atlas Games. And when you first have a look at Ars Magica’s rules and setting you could believe it was some kind of Mage: The Dark Ages or something. And this is not far from the truth since the Storyteller system was developed by Ars Magica’s co-author and initially Mage: The Ascension was planned as “Ars Magica in the Modern World”.
Some years agon I bought a copy of Ars Magica at my friendly neighbourhood game store, but I never actually played it. The one thing that always bothered me with Ars Magica is that you play not one character but at least two: the Magus and his Companion. While this sounds rather intruiging on paper, I prefer playing only one character in roleplaying games. But since I never tried it out, it could really work.
If you want to have a look at Ars Magica you can either buy it at your local game store or download the fourth edition for free.
The 272 page long PDF is available at e23, Steve Jackson Games’ digital content store. As far as I’ve seen the PDF is pretty close to the printed version. And by the way, you don’t need to register at e23 for downloading free content and that’s a big plus in my book!