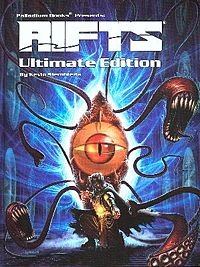 When I today opened my mailbox I found an US airmail envelope with the RIFTS Ultimate Edition inside it. I ordered it some time ago after writing about my favorite post-apocalyptic settings. The first thing that surprised me was the hardcover format. I’ve owned a few Palladium Book titles in the past and they all have been softcover books and this is a welcome change. My original RIFTS book is already on the verge of falling and the hardcover book looks much sturdier.

But I was not surprised to see that the look and layout of RIFTS hasn’t changed much. Kevin Siembieda still uses the same font throughout the book he always used and the layout is still the two-column layout we all have seen so many times in all these years. So, even if the cover is brand new, the insides are all the same. Or is there still a glimpse of hope?

There is actually quite some new material and the organisation of the chapters has changed a bit. The book now starts with the information on the setting, followed by the O.C.C.s (Occupational Character Classes) and R.C.C.s (Racial Character Classes). A bit strange is the detail, that Siembieda gives details on Magic etc. before explaining the rules and some background information on Chi-Town is thrown in somewhere between magic and equipment.  But if you have successfully run a RIFTS campaign before you know what I mean.

The book is mainly black and white on normal paper with some color pages on glossy paper thrown in. There is some new art (at least I haven’t seen it), but there is a lot of art that has been used in the original RIFTS book. When you are used to roleplaying rulebooks like the more recent D&D 4E books you will be surely disappointed by this book. My copy is from the Third Printing dated July 2008 and it looks like from 20 years ago.

The rules are old-school as well. RIFTS contains quite a large number of tables and every class has it’s own levelling chart. If you are a friend of modern and streamlined rules systems you should avoid RIFTS (and every other Palladium Books game) like the plague. Especially the combat rules still are broken in my opinion. And it’s totally beyond me, why they forgot to include a character record sheet.

Ok, when you’ve read this post to this point, you obviously think that I hate RIFTS to the bottom of my heart. But that’s not true. I just LOVE the setting. The RIFTS Earth is a great place to do campaigns in and some of my most fond roleplaying memories are connected to RIFTS. I just can’t understand why Palladium Books is still clinging to these broken rules and why their books still look like they were layouted by an amateur during the late 80s. When I look at this book I get the feeling Kevin Siembieda was sitting at his desk with scissors and glue tinkering the book together.

Another thing that annoys me is the fact that they never forget to put all that legal mumbo-jumpo all over the text. It’s just no fun to read an O.C.C.s description when there are (C), (R), and TMs all over the text. I understand that a company has to defend it’s intellectual property, but Palladium Books is just going to far.

I think that the Ultimate Edition looks better than the original RIFTS book but it’s far from being a perfect product. The over 375 pages long book is still worth it’s money if you can live with the subpar looks and the Palladium rules system. The setting has some very cool elements and opens up an endless playground for a creative GM.