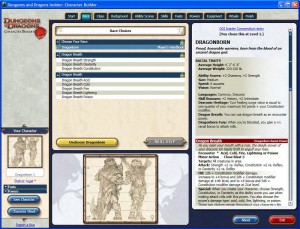 DDI Non-subscribers rejoice! Wizards of the Coast has decided to make the D&D Character Builder beta version available to non-subscribers too. You can get the downloader for the latest version from here. The installation process is a bit complicated though. After you run this “downloader”, it starts to download and installs the real install files (including the most recent version of the .NET Framework). Expect to have to restart your machine to complete the process.
According to what I’ve read the Character Builder open beta includes the same feature subscribers currently get. You can create all kinds of D&D 4th Edition characters up to level 3, which is pretty nice for a free beta product.
I haven’t had the time to test it properly, so a proper review has to wait. And I hope that the new classes and class options that were introduced in recent releases (like the Swordmage etc.) are already part of this software package. I am keeping my fingers crossed!

The Secret of my Success…