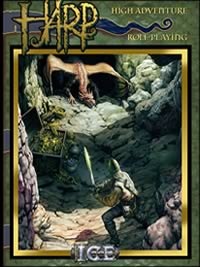 A friend of mine is an avid fan of ICE’s classic roleplaying game Rolemaster. I still have some very fond memories of our Rolemaster campaigns set into his homebrew world Ebur. When ICE announced HARP he preordered it and when it finally came out we tried it out as soon as possible. And it felt much like Rolemaster but more modern, more streamlined.

Rolemaster (especially in its later editions) can be mindboggling. If you like math-heavy and crunchy systems with a lot of tables (including very cool critical hit tables) Rolemaster is the perfect game system for you. But everyone else should have a look at HARP.

In my opinion HARP is Rolemaster done right. It still has the old-school feel of Rolemaster but is much less crunchy. And the best thing is that there’s actually a free preview version of HARP available. The 89-page PDF includes everything you need to play, including rules for character creation, combat and even a set of monsters.

By the way, my fellow blogger Zachary posted about HARP today, too, so check out his blog while you’re at it.