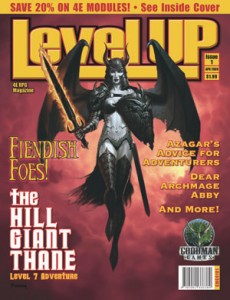 I have to admit that I haven’t heard about Goodman Games’ 4E magazine “Level Up” until a few minutes ago, when I noticed that criticalhits has twittered about it. Perhaps I’ve actually read something about it before, but today was the first time it grabbed my interest.
So I’ve checked out Goodman Games’ site and checked out the “Level Up” preview page. The cover for issue #1 is looking sweet. If you would secretly replace the text “Level Up” by “Dragon” it would look exactly like our former favorite gaming magazine. And I mean that in a good way. Of course I can’t comment on the contents but at least the exterior looks sweet.
And the price of $1,99 would be incentive enough for me to walk to the nearest gaming store and pick it up as soon as it’s out. BUT there are some problems with that:

I would love to check out a 3rd party 4th Edition magazine (especially for such a low price) if it was widely available or not horribly expensive for European gamers. But usually you pay enormous amounts for shipping and handling. A PDF variant could be interesting but not at double the normal price.