Evil DM Productions, an indie game design studio, has announced two new settings for use with the Savage Worlds rules. The first setting “Legends of Steel” will be a sword and sorcery setting:

Legends of Steel will be released in several editions, each one complimenting a different set of rules.

The second set of rules mentioned is their own Broadsword rule system that can be acquired for just $3.95 at RPGNow. I haven’t checked it out but our fellow blogger Philippe-Antoine Menard has said some nice words about it:

Broadsword is a minimalist but effective RPG engine that offers to recreate the best (and worst) of low-budget/low-fantasy movies taken directly out of the collective recollection of the sword & Sorcery genre of the 70’s and 80’s. It’s a great beer and pretzels game for a good evening of good natured mayhem and crude jokes.

Magic system needs to be hacked to be playable and equipment costs were left out of game (intentionally).

Still the game delivers at what it promises.

The second setting is “The Lost World of Hador”, a pulp setting inspired by the works of authors like Edgar Rice Burroughs and Robert E. Howard. Of course nobody can comment on the quality of the setting itself, but the cover artwork looks pretty sweet. 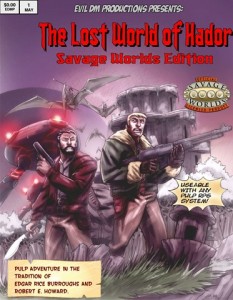 And since I always wanted to play a pulp game, I might check this out, when it’s released.