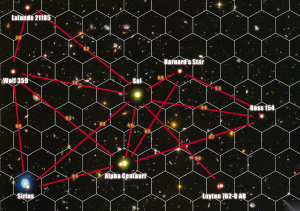 Last week I started working on a SF campaign after my players told me that they wanted to play “something with space ships and laser guns”. We checked out the SF campaign settings I already own (including Star Wars, Babylon 5, etc.) and then decided that we wanted something original.

After throwing around several ideas in the back of my head I settled on a pretty hard SF campaign that focusses on the solar systems in close vicinity to our own sun. And in order to visualize the campaign area to the players I created a starmap. Using this map as basis I started by adding a nice backdrop photo and a hex grid. The suns and labels where created in Photoshop.

I have to admit that I am pretty content with how the map turned out. The grid is not very helpful as it is, but I gives the map this “Traveller sector map” look.