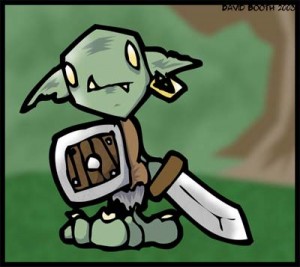 Generally I like the new rules for minions in D&D 4th Edition. They are several reasons why minions are fun: you can throw dozens of enemies at the players without killing them off instantly or being nothing more than a nuisance, there are no hitpoints for the DM to track. But there’s one rule that really bothers me: Minions never die when missed.

Huh? Some of you may now think “What’s the big deal?”. You know, there are quite a few powers in D&D 4th Edition that deal damage to enemies even when you rolled a miss. That’s especially handy when area effect powers are concerned. The problem is now that some of these powers are powerful enough to do some serious damage against normal monsters even when they miss but minions are completely unharmed. And in some cases this makes no frakking sense.

I had some discussion with my D&D 4th Edition DM about this and we agreed that the idea behind the rule was to make sure that you can’t kill all minions with a simple area effect spell, but I have to admit this rule really messes with immersion. It just feels wrong. But that’s a general problem I am having with 4th Edition combat: it works well as a game but most rules are totally detached from game reality. And don’t get me started on the daily sneak attack…

As I said before: all in all I like a lot about 4th Edition but the longer I play it I notice more and more rules that just don’t feel right. So, what are your thoughts on this?