You probably remember when QuestingDM and I created an “Unofficial RPG Bloggers Network” behind the back of the powers-that-be. I still had that forum software running on my server, so I decided to put it to a new use. I rebranded it to “Stargazer’s Irregulars” and installed a pretty new theme. 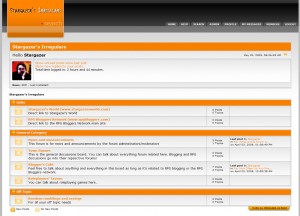 It currently features only a few boards but I intend to add a few in the coming days.  One thing I would like to add is a PDQ board since I haven’t found any PDQ-related communities but the S7S Yahoo group. If you have interested in such a discussion board, just let me know.