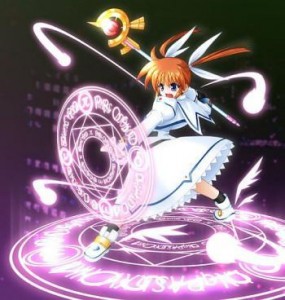 Recently I had a chat with fellow blogger pinakidion over Twitter about my Asecia setting that I usually call “steamfantasy”. He came up with the name “magipunk” that more closely described how he saw the setting. I like the word “magipunk” although I believe it creates an image that does not fit my vision of Asecia for example.

But the idea stuck in my head and I kept thinking about what a magipunk world could be. In the end I came up with a basic idea. What if you take a cyberpunk world (like the one described in games like Cyberpunk 2020 or novels like Neuromancer) take out all the high tech and replace it with magic? Then turn up the volume to eleven and you’ve got a magipunk setting!

The basic premise is that a world reached a modern state but most technologies are based on magic. Most magic research and production of magic items are in the hands of a few megacorporations. Magic and magic use are highly reglemented and mostly controlled by the corporations. Worldwide communications is made possible by the AstralNet.

The rich and the influential live in huge arcologies made from crystal, steel and glass while the poor and disenfranchised try to survive in slums sprawled around these arcologies. While the urban centers are clean, safe and protected by corporation forces, the rural areas are often wild and home to monsters, bandits and worse.

Magic augmentations are commonplace. People use magic and/or magiware to enhance their bodies. Sometimes even whole body parts are replaced to turn the common street fighter into a killing machine. Magic tattoos allow even mundane people to use powerful magics, magic items make the life easier … if you can pay for it.

For a lot of people the AstralNet has become their second home. With the speed of thought they travel in this mysterious realm, on the hunt of precious information, like newly-developed spells or alchemical formulas. But the AstralNet can be a dangerous place. Guardian spirits guard corporate secrets and there are rumors of wild spirits that attack the unwary traveller…

Corporations usually employ so-called “runners”, freelance operatives, who do all kinds of black operations for the corporations. Everything from corporate espionage to assassinations of rivals is handled by runners that often work for the corporation they worked against a week before. Runners are mere tools in the hands of powerful corporation executives.

My main inspiration for this world was the Neverwinter Nights module “HeX coda” by Stefan Gagne. I played the module a couple of years back and in my opinion it was one of the best modules I ever played. If you own a copy of NWN, you should try it out sometimes.

I am currently not sure if I will develop this idea into a fully-fledged campaign since I am currenly running my Ad Astra campaign and working on a reboot of my Asecia setting. But I am currently very fascinated by this idea and I might be tempted to put Asecia on the back burner again to develop a few more magipunk ideas.