Ok, in my first post I told everyone that this blog is about pen & paper RPGs and not MMORPGs or even LARP. But sometime you just have to break your own rules to get the message out! 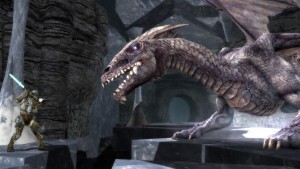 Dungeons & Dragons Online: Stormreach will be updated later this year into D&D Online:Unlimited that features a raised level cap (to 20), new races and classes and an item/cash shop. In addition to that the business model is changed from subscription-based to free-to-play with VIP accounts. That means you’ll probably have to pay a monthly fee to get all features of the game but you’ll also be able to play most parts of the game for free.

I have played DDO a couple of times in the past and although I enjoyed it very much, I returned to WoW after a couple of weeks/months. But when it becomes free-to-play I will definitely give it another look.

The updated game will soon reach closed beta where selected players will have a sneak peek at the updated game. If you want to sign up for the beta, or check out a couple of gorgeous screenshots, visit the official DDO site.

Update for Europe: Codemasters, which runs DDO in Europe has posted the following announcement:

As in the past, Turbine will be running this Beta program on its servers in North America to get the game ready for launch. This is a very exciting time for DDO and in the coming months, Turbine will unveil their plans to roll out DDO Unlimited to players around the world.

To clarify, for the time being, DDO Europe will not be assuming this new business model and the European DDO game service will remain a monthly subscription-based game with all new content created available to all subscribers, as has been the model up until now. As the Beta progresses we will release more information regarding the future plans for EU players.

As soon as we have more news from Turbine on what happens next we will share it.