Crimefighters has been written by David Cook and it’s rules may look oldfashioned from today’s standards but are definitely playable. There is even a introductory adventure and an article by Bryce Knorr about the history of the pulp genre. Even if you don’t intend to play this game, this article is worth the download.

The complete pulp roleplaying game can be downloaded at The Lair of the Evil DM. The PDF is also mirrored on the German RPG blog “Rollenspiel-Almanach“. 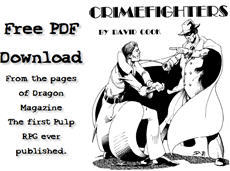 Review: Tales From The Loop–Our Friends the Machines & Other Mysteries