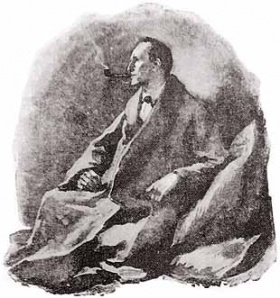 I am a great fan of Sir Arthur Conan Doyle’s Sherlock Holmes stories and H.P. Lovecraft’s Cthulhu mythos. Yesterday I found out that Neil Gaiman has written a short story called “A Study in Emerald” that combines the best of both worlds. And you don’t even have to buy a book to enjoy that awesome short story, you can freely download it at Mr. Gaiman’s website. And there’s even a 49-minutes audio book read by the author himself available for free here, but it seems to be down at the moment.

A Study in Emerald is a great inspiration if you want to run a Call of Cthulhu game with a twist. I don’t want to spoil anything here, but if you share my love for Sherlock Holmes mysteries and H.P. Lovecraft, you’re in for a treat.

And I am pretty sure that Call of Cthulhu GMs will agree that it could be interesting to run a campaign in the world described by “A Study in Emerald”.

As always I am interested in your thoughts? Do you think such a scenario could work in a roleplaying game? And please note that comments may include spoilers, so if you haven’t read the story, yet, beware!