What if the fathers of roleplaying were fans of SF instead of Fantasy? That’s what David Bezio thought when he created X-Plorers. His game reads and looks like it has been created back in ’74 (heck, I wasn’t even born back there). But I have to admit it looks pretty sweet. 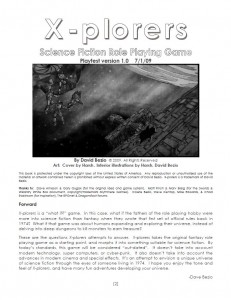 Please note that the game is still in an early playtest phase and the layout and artwork is not final. I haven’t had the time to read through the whole 42-paged PDF, but from what I’ve seen so far the game looks fully playable and has the charm of old-school D&D. I will definitely keep an eye on that game. 🙂

A look at BASH! Sci-Fi Edition