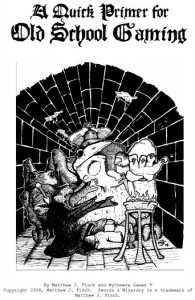 I have never played the early editions of D&D. Not even one of the retro-clones that are now freely available all over the internet. The oldest game I’ve ever played was the original Traveller and that was in the 90s, when I already had some experience with games like Warhammer Fantasy Roleplay, Shadowrun and a few others.

But I started to get interested in this side of our hobby, shortly after I joined the RPG Bloggers Network. The Old School revolution may not be a as big as some proponents think, but it’s big enough so that you almost can’t avoid reading about it. While I was on my quest to find out what makes a game “Old School”, fellow RPG blogger Chgowiz recommended Matthew J. Finch’s “Quick Primer for Old School Gaming”.

What I liked about the book (aside from the fact that it’s free) is that it doesn’t tell you that Old School is the correct way to play RPGs. But it explains how things were done back in the way and what the real difference between old and modern gaming is.

And I have to admit that I very much liked what I read. Matthew describes several “Zen Moments”, where he thinks a “modern gaming concept is completely turned on its head” by an older gaming style:

I believe every player, gamemaster and especially every RPG blogger should have read this book, because it’s a great primer on Old School gaming and will probably help to understand the other perspective better.