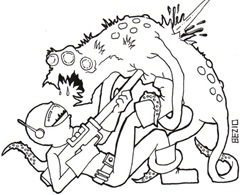 X-plorers is a new roleplaying game by David Bezio’s Grey Area Games. But although its brand-new you could easily mistake it for a game from the 70s. And I mean that in a good way. The basic idea behind X-plorers is a thought experiment: What if the fathers of roleplaying were SF fans instead of wargamers and fantasy fans? And X-Plorers is like the answer to that. In many ways it reads like what D&D might have become if it was a science fiction game.

The 62-paged book (David was nice enough to provide me with a free review PDF of the final version. Thanks, David!) contains everything you need to start playing, aside from players, dice and such things, of course. The first few pages describe what X-plorers is about, provides some background on the game’s setting, and gives a detailed example of how gameplay works. I don’t think that anyone who picks up this particular game will need an explanation what a roleplaying game is, but it certainly helps to set the mood. The game is using the OGL and uses material from both the SRD from WotC and Sword & Wizardry. If you have played any d20 game and/or retro-clone you should be able to get a hang of the rules in mere minutes.

Chapter 1 gives details on the character creation. Using 3D6 you roll up the four attributes Agility, Intelligence, Physique and Presence. After that you can choose your character class. X-plorers comes with four basic classes, that are presented in Chapter 2: Scientist, Soldier, Scout and Technician. The class determines to what skills a character has access to and how he advances with each level. Although the different classes are much less different then in D&D for example. The Scientist and the Technician even share the Computers skill, although the Technician may even use this skill to repair the computer or write programs. All classes get a d6 hit die and aside from the Soldier all classes have the same “base hit bonus” progression. I think this works pretty well in a SF game.

The progression table goes from level 1 to 10, but gamemasters can easily extrapolate from there and play to any character level they wish. There’s also some kind of multi-classing, which allows characters to learn skills from other classes.

Chapter 3 focuses on equipment. There you’ll find anything your characters will ever need in their missions from a basic compass to various high-tech weapons and even vehicles and robots. Although the chapter is quite short I didn’t have the feeling that anything was missing.

Chapter 4 is about how the game works. In some detail you get explanations on how skill throws and saving throws work, how to get experience and level up characters, and last but not least: combat rules. Combat works pretty much The combat rules are very streamlined when compared with the ones in the SRD and David even added a nice critical hit chart. When a NPC hits 0 hp he’s out. When a PC gets pummeled down to 0 hp he rolls on a table with a d6. If he rolls a 1 he’s pushing up the daisies, but with a result of 6 an adrenaline surge occurs and the player gets d6 hp back but at the end of the combat he looses consciousness for 1d6x10 minutes. Cool!

Chapter 5 contains all the rules about space from travel times and cost to space ships and ship combat. The combat system is very detailed and works without any battlemap. Instead you use a space combat chart for each enemy ship. When the encounter starts, there are 5 “Space Units” between the enemy ship and the player ship. During the movement phase the pilot of the ships can then decide if the want to keep the distance, evade or move into attack positions. The system is designed in a  way that each class can take over a certain job in the ship. Soldiers can use the guns, scientists plot courses using the navigational computers, technicians try to fix battle damage and scouts are great as pilots. The damage system works much like in the personal combat rules and there’s even a Ship Critical Hit Table, which is slightly more deadly than the normal Critical Hit table, especially since a result of 1-2 (Explosion!) usually results in the death of all player characters!

Chapter 6 is for referee’s only and give hints and advice how to create and run missions and how and where to get ideas and inspiration. The rules section of the book is then concluded with chapter 7 which provides rules for creating NPCs, creatures and aliens. It also contains a couple of sample creatures and some basic NPCs like Security Guards and Pirates (every game is better with Pirates! Yarrr!)

The book is then concluded with chapter 8: Cleopatra Station. Cleopatra Station is a complete mission for 3-5 player characters which will probably take 2-4 hours to complete. I don’t want to go into detail here in order not to spoil anyone, but it’s a great adventure to help the players familiarize with the rules and the world. It might be a bit clichéd, but hey, wasn’t that the idea? I haven’t run the mission yet, but I hope I can do so this weekend.

X-plorers is a great book: it feels like a RPG from ´”more civilized times”, with pretty easy to learn rules and some really nice ideas (like the Adrenaline Surge result on the Critical Hit Table) and an ingenious space combat system. If you ever wished the first roleplaying game ever created was not about crawling around in Dungeons and slaying Dragons but exploring space with skill and laser gun, X-plorers is the game for you!

Ok, you’re sold and you want to give X-plorers a try, what can you do? There are three ways to get your hands on that fine game:

Ok, I am now going to prep my first X-plorers game for saturday. I am so excited! 🙂
And by the way, the first issue of Galactic Troubleshooters, the official quarterly X-plorers supplement was released a few days ago. It can be bought here.