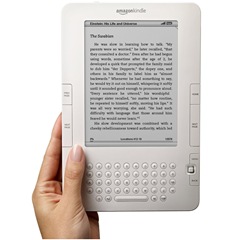 Amazon is finally shipping its Kindle ebook reader to Non-US customers, too. They still don’t offer localized versions, but at least people from all over the world can order the Kindle from amazon.com and access the Whispernet in 100 countries.

I have to admit I love gadgets. And I have been looking for a decent ebook reader for quite some time now and Amazon’s Kindle looks pretty decent if you ask me. But if I put so much money on the table I want to be able to use the Kindle at the gaming table, too. So, are there any RPG rulebooks available on the Kindle store? How easy is it to convert PDFs (I am thinking about the stuff I bought on RPGNow for example)? Can the Kindle handle graphic intensive books? If you have used the Kindle for this purpose before please share your experiences!

Roleplaying in the Dune universe