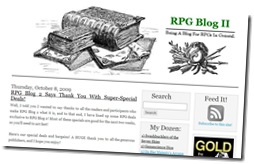 Fellow RPG Blogger Zach of RPG Blog II wants to say thank you to his readers and so he has lined up a few deal exclusive to RPG Blog II readers! If you want to make some great deals, check out his blog now! Most of the special deals are good for the next two weeks only!