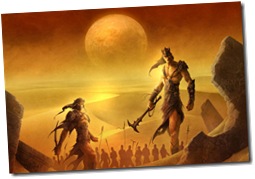 This morning I noticed a post by Moritz Mehlem on his blog “Von der Seifenkiste herab”. In his latest blog post he writes about Matt Seplin’s project of bringing Dark Sun to Spellcraft & Sorcery.

As you may know, S&S definitely looks like another retro-clone but in reality it’s more a game inspired by OD&D. The combat system used in the game is pretty close to Chainmail’s Man to Man combat system. So S&S is a “what if” game that plays with the idea how OD&D would’ve looked like if Gary Gygax and Dave Arneson used the Chainmail combat rules. But said that, I believe it should be pretty easy to convert between S&S and any of the retro-clone like Swords & Wizardry.

Back to Matt’s Dark Sun project: It’s called “Under the Dark Sun” and already contains everything you need to play including new classes, species and psychic powers. The playtest draft of the rules is available on Matt’s website and in PDF format. The PDF is actually pretty nifty, the style is reminiscent of the old AD&D 2nd Edition Dark Sun books. If you are a fan of Dark Sun and old-school D&D, you definitely should check this out.