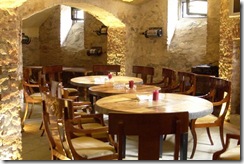 Yesterday we had our monthly RPG pub meeting in the Villa Konthor in Limburg. This time I introduced our regulars to WR&M, my rules-light fantasy roleplaying game. The five players had no trouble creating the characters and they embarked on their first adventure in the Fallen Imperium in no time.

The premise of the game was that they player characters have been drafted into the Cemimus militia and where ordered to relief another group of militiamen which has been garrisoned at a former Imperial watchtower in a remote area. On the way to the watchtower they had their first small fight when they were ambushed by a group of ruthless bandits. We used the rules from The Art of Combat to make things more interesting. We also used the “Armor reduces damage” option. Combats were fast and fun, but I noticed that the system is still a bit rough around the edges.

All in all the players very much enjoyed their first session of WR&M but there was also some criticism. The “exploding dice” rule can pretty much unbalance the game and weapon damage is a bit off. One of my players noticed that his axe caused less damage than a longbow, which didn’t make that much sense to him. And I have to agree, the game’s rules currently favor ranged weapons.

At the end of the session we hadn’t quite finished the adventure, but all the players told me that they are interested to play WR&M again. Next month I’ll probably run a game of Dungeonslayers 4th Edition, but after that I might run some more WR&M for them.

I will also make good use of the feedback I’ve gotten so far, to gradually make WR&M better. Don’t expect a new edition too soon, but there might be a 2nd edition of WR&M in the future.

Is it just me or is the post-apocalypse much like a fantasy world?