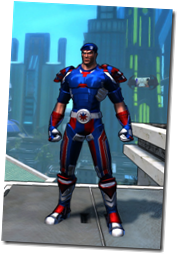 Recently I started playing the MMO Champion Online. Champions Online is based on Champions, Hero Games‘ award winning superhero roleplaying game. Although I enjoy the MMO very much so far, I don’t know anything about the pen & paper game it was based on. So I started to do some research.
I quickly noticed that although the MMO is based on the Champions Universe, it’s not using the HERO System! But Hero Games is planning to release a book to allow you to recreate your Champions Online characters for the pen & paper game.

The first edition of Champions was published back in 1981 and it was actually one of the first games to use a point-buy system for character creation instead of randomly generating stats by rolling dice. It also took a tool kit approach for power creation much like what you may know from the more recent Savage Worlds game.
In 1987 the Champions rules system were released as the generic roleplaying game HERO System that allowed play in all genres. Recently the 6th edition of HERO has been released. 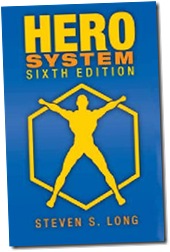 Characters in a HERO System game are described by Characteristics (like Strength and Intelligence), Skills, Perks (special resources the character has access to like money, contacts, etc.), Talents (unusual abilities and powers better than Skills but less powerful than actual Powers) and Powers. Powers are the superhuman abilities of golden age superheroes, magic of dark sorcerers or even psychic abilities. In the HERO System Powers are effect-based. So mechanically a superhero’s Flame Blast power may be similar to a wizards Magic Missile power. Powers can be customized by numerous modifiers, which effects not only how the Power works but also how much it costs during character creation.

Most check are made by rolling 3d6. A roll is successful if you get a result equal or less than some given difficulty. A roll of 3 always succeeds, a roll of 18 always fails. Although the basic mechanic is quite easy, the HERO System is notorious for the math involved in play and character creation.

I have to admit I still haven’t read any of the Champions roleplaying game nor any of the HERO System books. The only sources I had were the internet (mainly Wikipedia and the official Hero Games site and a 5-paged introduction to HERO System 5th Edition). But I have to admit I am quite intrigued by the way this game handles superpowers. And I always had a soft spot for the Superhero genre, so I may give Champions a try.

Are there any Champions/HERO System veterans with us? Can you please share some of your thoughts on the system and what edition of the game would you recommend for new players? Any advice is appreciated!

Swashbucklers of the 7 Skies

More thoughts on D&D Next