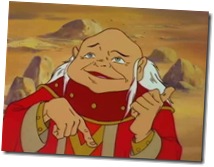 I am a very lazy when it comes to preparing roleplaying sessions. When other GMs plan and prepare for weeks I usually make some preparations just mere hours before I start running a game. Sometimes I don’t prepare at all, hoping that my improvisation skills save the day. If everything else fails, a nice tavern brawl keeps the players occupied for long enough to give me some time to make up something in the back of my head.

Of course this doesn’t work in every game. I am currently running a Savage Worlds game using the Rippers plot point campaign. And if you ask me, SW is perfect for the lazy GM, especially when you use it to run any of the plot point campaigns. In most cases you sit down at the table, read the next plot point description and the rest is done by hand waving.

You have to be thinking on your feet all the time, making up NPCs on the spot and coming up with encounters on the spot is vital for the lazy GM. And alas this doesn’t work in every game. You should never try to run an investigative game that way. It just doesn’t work. Ok, if you have read every murder mystery novel on the planet you may be able to pull it off, but in most cases it’s near impossible to be successfully lazy when investigative games are concerned.

But especially when you and your players favor action over complicated stories, you can easily have a lot of fun without hours of preparation. And being a lazy GM although helps you in well-prepared games or when you are running and commercial module. When things go awry, you can always rely on your improvisation skills, that you have trained while being the lazy GM, to save the day.

There’s even a reason why being a lazy GM can also improve your game. Some GMs tend to meticulously plan their adventures which may lead to the focus being shifted from the players and their characters to the background story and the NPCs. If you don’t plan ahead you usually rely on your players to drive the action while you improvise on the spot.

Recently my group asked me to run “Trail of Cthulhu” on New Year’s Eve. I fear I will have to do some preparation for this session after all. As I wrote before, it’s extremely hard to pull off a great investigative game without some preparation. But in the long run I will probably always be a lazy GM. 😉